Boots made for walking

Fiona Armstrong-Gibbs has worked in the fashion industry for more than 20 years. Last week she talked about some of the issues surrounding footwear – now she takes a look at production processes.

The average price of a pair of adult’s shoes has fallen over the last 20 years – like clothing, this deflation is attributed to globalisation. Production capacity has increased, particularly in China since the mid-1990s and it now produces two thirds of global footwear output. The majority of these shoes are made from synthetic materials which are relatively cheap and reliable to use – compared to natural materials such as cattle farming for leather, or growing rubber or cotton.

Supply chains have become more efficient, agile and responsive, as has communication and logistics management. There is more choice due to cheaper economies of scale – which has increased competition in the retail market and given more options to consumers. As consumers, we now expect choice and availability, which has become more prevalent than quality, fit and durability – particularly in fashion styles.

After the end of the Multi-Fibre Arrangement (MFA) in 2005, which had imposed quotas on the amount developing countries could export to developed countries, the EU imposed an import quota on footwear from China and Vietnam (between 2006 – 2011), in a bid to protect EU manufacturing. By 2011 it was recognised as detrimental to global trade and abolished – giving a  clear motivation for retailers to source cheaper footwear from outside the EU.

Global production of footwear has increased from approximately 10 billion pairs in 1997 to 23 billion pairs (every year) in 2017. Raw materials, such as the use of chrome chemicals to tan leather, is believed to be the fourth most polluting process in the world, according to worst polluted.org. Synthetics (man-made materials) from petroleum are widely used in the production of casual footwear and trainers – for the most part these are not made from recycled material, or currently recycled.

A variety of techniques are used in the manufacture of footwear. Injection moulding, for example, creates less waste because there are no off-cuts (compared with flip flop soles, created like a cookie cutter). But, as it works on the concept of economies of scale, the more you make, the cheaper they become – encouraging over-production to bring down the price. The majority of cheap flip flops and trainer lining/ padding is made from ethylene-vinyl acetate copolymer (EVA) or foam rubber (not real rubber from the rubber plant), and is not recyclable in its current form. There are several studies that focus on the use of leather production, toxic glues and water pollution. 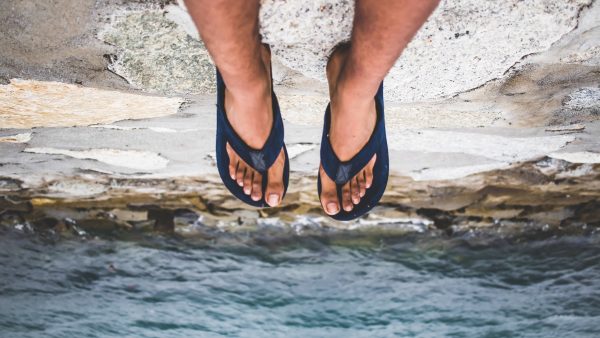 Do we need a return to handmade shoes by smaller local companies using fewer chemicals and better quality, or tax incentives for smaller companies to encourage sustainability? A focus on one style of shoe to maximise productivity, or using natural or recycled materials and eco tanning techniques? In the UK, the footwear industry produces about 5 million pairs of shoes a year – much of this isn’t classified as fast fashion however. Working with and supporting these businesses will encourage local growth and allow environmental issues to be addressed.

Chronic under investment for the past 50 years means that the UK cannot compete on cost alone (New Balance and Hotter are good examples – Hotter has invested in its factory, machinery and people in Skelmersdale so it can manufacture in the UK and New Balance has specifically focussed on a Made in Britain range from its Lancashire factory). There are high commercial risks associated with footwear manufacturing but, when done right, the rewards are a better environment and less waste heading for landfill. What are the rates of carbon emissions from air freighting fashion footwear into the UK? Is it really necessary to air freight non-perishable items such as clothing and footwear? They’re all questions we need to start asking…

Images by Bruno Nascimento and Dhruv Deshmukh on Unsplash.