← Citizens of the World
Let’s talk: Universal Basic Income →
Featuring crowdsourced tales of innovation, social movements, and future-facing ideas, Atlas of the Future is an online platform of stories of the people working on projects that are shaping a positive democratic future. We spoke to co-founder Cathy Runciman about the importance of Atlas of the Future, and why now is the perfect time to uncover these stories.
Share —
Facebook
Twitter
Email
Published —
06.18.18
Writer —
Andrew Beattie
Movement —

What lead you to Atlas of the Future?

I worked for Time Out for 12 years; I travelled the world working with people who wanted to set up Time Out in their cities. I had a great time, and it was a great privilege to see lots of the world; places I would have never otherwise have been to. But also, there was something a bit relentless about the pressures of reasonably large scale commercial media, that for me was starting to raise some big questions. That model was looking, even back then, increasingly fragile, if not out-right broken.

I also looked at the age of my children, and I thought it time to give myself some breathing space and think about what comes next. Through my work at Time Out I had met Oriol Soler (president of Barcelona-based media cooperative group, Som and the Institute of Advanced Architecture of Catalonia), and he and I had always said we should work together.

We began talking about the spaces that interested us, and that obvious question, ‘Are there any gaps left? Is there anything that’s not being done?’ It almost sounds slightly ridiculous when I tell it, but the space that we were both interested in was the future.

It felt that at the time there was the mainstream media point of view which was: yes, there’s all this extraordinary stuff happening, particularly in tech and science, but it all comes with bad possibilities.

Then, there’s amazing media like Wired, which is a beautiful product and brilliantly done, but it’s not very inclusive. That feels to us like a publication that’s having its own conversation with the people who consider themselves pretty much the new elite – the ones who are creating the future.

That was the space we landed in. We had a simple underlying philosophy, a theory of change if you wanted to call it that: let’s put people at the beginning of this process; not technology, not science, not the development, but people and their work – the things they’re choosing to focus on, the problems people are now dedicating their life to solve to make the world a better place.

What is Atlas of the Future, today?

Working with our awesome Editor-in-Chief, Lisa Goldapple, we set out to create a platform for the future, which would have two key aspects to it:

1. It’s an open submissions platform; anybody can share their work and project with us. One of our questions was, ‘Will anybody tell us about what they’re up to?’ – that will test whether our narrative resonates, and people are interested in this.

2. We would do our own journalistic investigation into things that we felt would meet our criteria (and we chose deliberately broad criteria). We wanted to have a big welcoming front door that said we would write about the work the people do, if their projects were real. In other words, we weren’t going to write about stuff that was at concept stage, it must have got off the ground; it might be small, it might need more support, more funding, but it exists. It also needs to be able to define the problem that it’s trying to solve, or wants to solve, and something about its approach should be innovative, creative, or original.

We wanted to write about stuff that’s real to show that the future is being created now  by people who are making their life’s work about this, about solving that problem, about something with a real social mission at its heart.

We’ve got about 500 projects mapped on The Atlas now, and between 20 and 25 percent have been submitted by people through our open process, which is brilliant.

You’re also working with openDemocracy. Tell us about the work that they do?

openDemocracy is in its 16th year now and is a real pioneer of digital media. Its mission is to challenge power and inspire change through tenacious reporting, thoughtful analysis and democratic debate. It’s a platform that’s home to a whole series of important projects, which work together collectively. These projects could be thematic, so there’s a section called 50/50 which focuses on gender, sexuality, and social justice; or there’s a number of regional focuses in the Middle East; Russia and the former Soviet space; and Latin America. There are some amazing investigative projects – there’s one called Shine a Light which exposes injustices, and another that is looking into the dark money that funded Brexit.

To see them all work together collaboratively, be part of something bigger, and exist in this whole alternative space to what I understood media was, is amazing. I’ve gone on working with them, and it’s still part of my life.

The other things that became important to us once we’d launched Atlas was starting to find partners – doing everything collaboratively, finding ways to make the sum of the parts greater than the whole. You can’t act alone when you are small (and who wants to?) – so we are all about collaboration. One inspiration that I took from openDemocracy was to publish everything under a Creative Commons licence, and to not be concerned about ownership of the IP that we created, but to be concerned about how far you could get the messages and stories to travel.

For me, I do think we need an independent media sector that can speak its mind, and that can hold power to account – so supporting that is one goal. Then the idea of raising the profile and telling the stories of people and their social mission-focused work to make the world a better place – that’s another.

Have there been any stand out stories for you along the way?

There’s an absolutely fabulous project from Cameroon where there’s a young entrepreneur, Ismaël Essome Ebone (his company is called Madiba & Nature). Where he’s from in Cameroon, waste is mainly not recycled, and single-use plastic bottles are just clogging up the waterways. He and some friends started collecting those bottles and unblocking the waterways. They ended up with all this plastic waste thinking: ‘What do we do with it?’. So, he designed and built a fishing canoe out of unrecycled plastic bottles – the design is so great, and the build is so stable. People were looking at him thinking: ‘what are you doing?’ but it turns out that it’s a solid design for a fishing canoe; in fact, it’s more stable in rough water than the traditional design. Now he’s making more of those, he’s won a Clean Seas Award from the UN, and now he’s looking at other uses for the plastic waste, such as to build housing.

It’s one person doing his thing, but his story is everything; it’s determination, but it’s also working with other people, so it’s not only an individual hero story, he’s worked with his local community, he’s got amazing results. It’s creative, it’s original, it leads to other things, it’s tackling different parts of a problem, so there is a systems approach. I think it’s amazing.

But within the waste space at the other end of the spectrum we’ve mapped projects such as massive bio-reactor systems which use human waste and turn it into energy.

We’ve mapped individual initiatives and businesses such as Tony’s Chocolonely which produces slave-free chocolate bars; we’ve mapped Forest Rovers Football Club which is a vegan football club; we’ve also got a company called JUST, which is a biotech organisation making eggless eggs. We’ve got projects like the underground farm, Growing Underground in Clapham, or Dougie McMaster’s Silo Restaurant in Brighton which links food, waste and energy.

We focus on some other things, we’ve got a lot of amazing youth empowerment projects. I have a particular interest in showcasing amazing women and girls, and projects looking at how to improve outcomes for them. There’s an extraordinary range of human experience on our platform, of people in different circumstances around the world.

For me, I look at these people putting all their energy, all their creativity, and all their talent into doing something to make this world a better place, and that’s not celebrated in the mainstream media narrative.

We need a story about the future that isn’t fear-fuelled. Instead we want to say ‘look at this possibility’ and maybe that helps people say: ‘I could do something too, this is something to do with me. I have choice, I have agency, I’m gonna do that thing I’ve been thinking about’.

You recently ran your first Atlas of the Future event in Barcelona called Fixing the Future. How did that come about?

There’s nothing like bringing people together, and to see those connections exploding off the computer screen into the real world, feels incredibly important. It takes a lot of energy and resources to run events, but for us our first event was another way of testing out our narrative.

There was an exhibition at Barcelona’s most important cultural centre called, After the end of the World, which was groups of artists reacting to man-made environmental change, so it’s fairly dystopian – it’s quite dark. We were given an opportunity to curate a reaction to that. What did we want to do in reaction to that? Our answer was: we want to bring together a group of people which has something different to say about what they are doing today, to try to tackle some of these issues.

We called that event Fixing the Future, we ran it in a cultural centre, but we didn’t run it as a business conference. We had ten amazing speakers, and even though some of those speakers would be amazing speakers at a business conference with a massively high-ticket price, we wanted to pitch our event as: ‘come, spend a day in our cultural space, hearing about people doing things differently, thinking about other possibilities’. We were overwhelmed to be honest, we had capacity for about 320 people and about 350 came.

What was interesting for us is, these weren’t people we knew, this was people coming to sit for a day in a cultural centre, and the overwhelming reaction we got from people was, ‘I need more of this. I need to hear this more’. So that’s our mission – to find and tell more stories, online and offline. 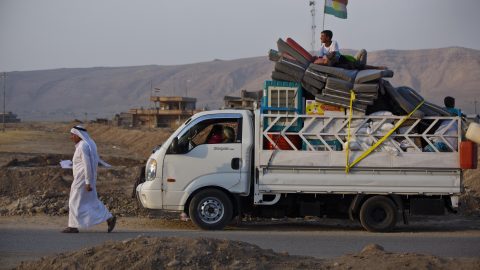 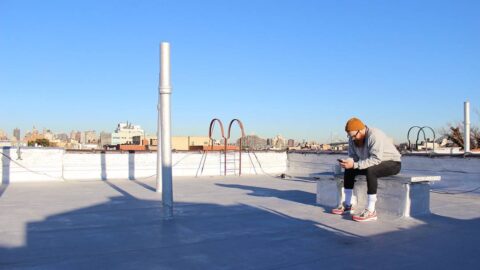