Parley for the Oceans is a global movement of artists, musicians, fashion designers, actors, filmmakers, inventors and scientists all committed to one common cause: saving our oceans.

What was your first thought when you woke up this morning?

“Nobody wakes up in the morning and thinks: ‘I’ve destroyed the sea.’” says Cyrill Gutsch, founder of Parley for the Oceans. But it’s a thought that we should all consider; and if left too late, it becomes a cross that we all have to bear.

Our oceans are dying. Careless overfishing, global warming and marine pollution has contributed to the destruction of our ocean-dwelling species, many having been lost forever.

“It’s something that’s being recognised everyday by even the most conservative scientists and experts,” says Gutsch, “we’ve entered into the sixth mass extinction event, and species are dying out at lightspeed.”

So, what’s the ultimate deadline for a total ocean collapse? “2048.”

It sounds like a line ripped straight out of dystopian literature. But no, the reality is, if we don’t act now, it could be too late. But there is hope; there is still time to turn it around – precisely 10 years – and Parley for the Oceans, has the solution: global collaboration.

Parley for the Oceans is a global movement of creators, thinkers and leaders who have united to protect our oceans. Addressing the major threats to our planet’s fragile ecosystem, Parley for the Oceans collaborates with artists, musicians, filmmakers, fashion designers, journalists and scientists, to save our beautiful seas.

In June 2015, Gutsch was invited to the United Nations in New York to present, ‘Oceans. Climate. Life’ – an international call-to-arms for global leaders and communities to vow to protect our earth from detrimental human activity. 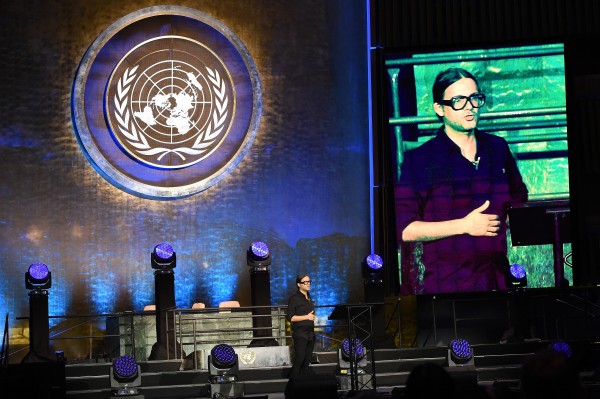 It sounds like a huge ask, but Parley for the Oceans has been gaining traction on the world stage, since its inception in 2013. Having already formed long-term partnerships with adidas and global brands G-Star and Bionic – Gutsch tells me that six more partnerships are set to be announced in the coming year.

Through collaborating with clothing giants adidas, Parley for the Oceans has been able to reinvent the way we deal with ocean plastic – by recycling it into into the world’s first ocean plastic shoe. The adidas shoe, made entirely from recycled, illegal gillnets, “wasn’t just a shoe,” says Gutsch, “It was a letter of intent. It was a battle cry. And today we have a full supply chain developed where we take trash from the oceans, the beaches, the lakes and the seabeds and bring it back into the supply chain. It replaces virgin plastic.”

There’s plenty more fish in the sea, right? With water taking up approximately 71% of our earth’s surface, and 97% of that water being held in the world’s oceans, it would be easy to assume that hurtful human impact has barely scratched the surface of our vast underwater world. But the reality is shockingly different. And it was this mindset, that brought Gutsch to where he is today.

It all began with a chance encounter. Gutsch was attending Art Basel Switzerland when he happened to meet Pamela Anderson, who alerted him to the plight of Captain Paul Watson, cofounder of the Sea Shepherd Conservation Society. Watson, an activist for marine conservation, has been defending our deep waters for over 40 years, often controversially so. After an international arrest warrant was placed over Watson’s head in 2012, he was pulled off a Lufthansa flight and imprisoned in Frankfurt. Watson’s story reverberated with Gutsch, to the point where he boarded a flight to Germany, to meet with him.

“I felt it was my calling to help him. He’s a person who’s dedicated his whole life to a purpose – to save our planet.” says Gutsch. “I felt responsible; I felt like a villain – because it was people like me who are creating the damage. We are the ones driving and inspiring business. It made me realise that there’s a real need to think about, and redesign the way we’re producing and consuming.”

Gutsch recalls his feelings after the meeting, which took place in the confines of Watson’s lawyer’s office in Frankfurt: “The most shocking thing was that this guy sitting in front of me, had been arrested for doing my job; protecting my life. Because every breath we’re taking is generated by the sea, and without that oxygen, we would not be here.

“He was out there protecting my life, while I was busy destroying it. The worst part was, I was not aware of anything until I met Captain Paul Watson – I had no idea that we had a problem with our oceans…”

Climate change is happening, and with it comes ocean deoxygenation. A recent study by Matthew Long, an accredited scientist specialising in oceanography and environmental engineering, shows that over the course of the twentieth century, oxygen concentrations in our oceans have been on the decline. This decrease in ocean oxygen is a response to surface warming, and Long predicts that even with reduced atmospheric CO2 emissions, by 2100 there will be a 1.2 degree warming to our upper ocean.

There is nowhere that this is more evident, than Australia’s Great Barrier Reef. Ocean warming has had a detrimental effect on the Reef’s wondrous and truly unique ecosystem. In 2016 alone, climate change-related bleaching has killed almost a quarter of its coral, and many scientists worry that it could be too late to save the rest.

Coral bleaching occurs when its habitat becomes too warm, resulting in the coral becoming stressed and expelling the algae that lives inside it. Without this algae, the coral’s white skeleton becomes exposed and its energy begins to decline; eventually it starves and dies.

“We are already seeing the consequences, especially in countries that are in the middle of the ocean. They depend on the oceans to survive, and the currents have changed and life is dying at a rapid speed there,” says Gutsch.

“The coral reefs are bleaching, the big fish are disappearing; sharks are down to 10% of what they were and bluefin tuna is down to single digit percentages. We’re killing everything off.”

Removing water pollution from the equation gives our coral, and our other ocean dwelling creatures an all important lifeline. Water pollution comes in myriad forms; one of the most threatening being ocean plastic. According to reports, at least eight million tonnes of plastic leak into our oceans each year, and by 2050 it is predicted that there will be more plastic than fish in our oceans.

“We have to learn from nature; in nature there is no concept of waste, everything becomes something new. We need substances that break down without leaving nasty traces,” says Gutsch.

“Right now, we’re producing all of these substances, like plastic, that are never dying. We use them for minutes; we use them for half an hour – and then they stay on this planet forever. They cut down in size but they never disappear. We’re toxicating our planet right now and this is what we have to end immediately.”

And how can we stop this toxification? Through global collaboration, Gutsch tells me. “We have to innovate our way out of it.”

“People rarely change their lives overnight to protect the sea and become hardcore activists; that’s not what we expect. We want people to see saving the oceans as being lucratively beneficial – to see them as more lucrative to save, than to destroy.”

“We need people to actually see an advantage to protecting the ocean. Doing the right thing for the planet, goes hand-in-hand with there being a profit and benefit of doing so.

“Deep down this is the only true motivation, and that was a really hard realisation for us to make,” admits Gutsch. “In the beginning we were very naive. We just thought that everybody should be obliged to do it, but we soon learnt that nobody can afford to spend too much time on these subjects, and it eventually fades away.”

By partnering with huge corporations, like adidas, Parley for the Oceans has opened up the ocean-plastic debate with the world. They’re changing how companies deal with their waste, and how they can creatively incorporate ocean-plastic into their products.

“Adidas is an ocean champion for us.” says Gutsch. “They’re an example of how a heavy-polluter can become the motivator and the agent of change for a whole industry.”

One year ago, the Parley X adidas ocean-plastic shoe was a mere concept – today it is a reality. It has recently been announced that there will be one million ocean-plastic shoes produced, and this is only the beginning. “We’re talking here about the mass-replacement of a material; and adidas has committed to do so. They have put their whole company behind it and Parley for the Oceans really became part of their brand strategy.”

So, what’s next for Parley for the Oceans?

Gutsch tells me that they have recently partnered with the United Nations on its Small Islands Development States Programme (OHRLLS).

Similar to how Parley for the Oceans delivers its strategy to companies like adidas, it is now delivering it to countries. To date, Parley for the Oceans is working with 19 countries to help them to educate people; implement curriculums in the school systems; help to educate the leaders of the countries and to phase out plastic consumption whilst supporting each country’s individual legislative laws.

But, before change can truly happen, people need to be educated about the oceans; to fall in love with them, says Gutsch: “Everybody thinks that they know the sea. But a lot of people don’t know the sea. Few people have the luxury to dive, and to meet and explore the magical, blue universe down there.

“We know more about space than we do about the deep sea. We need to create fascination and love for it – to inspire people to explore it. How can people protect something if they have no idea what it is? People won’t fight for something that they don’t understand.”

To make this change, Parley partnered with artist Doug Aiken and the Museum of Contemporary Art, Los Angeles, to produce three stunning underwater pavilions; which act as a kaleidoscopic observatory of ocean life. The underwater pavilions will launch this winter and will remain submerged in the seas surrounding Los Angeles, for approximately six months.

“The underwater pavilions drive the eyes under the water’s surface. They’re like bait – they’re a gateway to our underwater world. They invite people to dive and get a new picture and a new perspective on the sea.

“People are very surprised that they have to actually put their heads under water; sometimes they’re scared, anxious and concerned to do so.

“We need their support – there’s no way that we can do this alone.”