Now the dust has settled and the organisers are looking towards Meaning 2018, Emily Yates reflects on Meaning 2017 - Brighton’s leading conference for progressive business.

Brighton is host to several excellent tech conferences, but the progressive business space is held by Meaning; which has just concluded its biggest event yet. This year’s gathering was hosted by the author, futurologist, and stand-up comedian Mark Stevenson; who contributed a focus on ‘fringe innovation’ in addition to the conference’s usual themes of twenty-first century leadership, collaborative working and the post-growth economy.

The result was an eclectic line-up of speakers on the day, as well as a three-day ‘Meaning Fringe’; bringing local community businesses together for a series of workshops and discussions. It’s a significant expansion for the community, and an invitation to go beyond ‘networking’ into a bold mode of collaboration. Meaning is also ‘walking the walk’ in this regard, forming new partnerships with arts organisations such as the Attenborough Centre of Creative Arts and the RSA; who provided some of the week’s best reflective spaces.

As a full-time curator of ‘fringe innovations’ through his books and projects, Mark Stevenson is adamant that the progressive business case is proven and that it only remains for us to wake up others to the reality. His rebellious approach to ‘the cynicism of the status quo’ was reflected in the conference’s best project stories, which were also the ones with the most controversial roots. Stand out moments included the Dutch chocolate company waging war on slavery, and the man behind the record turnaround of a Lincoln primary school – “the Department for Education’s enemy number one” – Carl Jarvis.

The conference welcomed one of its most inspiring guest economists yet in Kate Raworth, who introduced her theory of Doughnut Economics. After decades’ experience in international development and climate change, Kate created the ‘doughnut’ as a simple visualisation of the interdependence of human and planetary wellbeing. It’s a bold attempt to counter the entrenched beliefs around free market ideology and end the damaging conception of climate change as an ‘externality’ to economics, or political ‘single issue’.

Kate does this by meeting people where they are, with a simple ‘compass for the 21st century’, combining Rockström’s Nine Planetary Boundaries with the UN’s Sustainable Development Goals, and giving a clear indication of where we are overrunning the boundaries on both sides. What seems to drive her most is her insistence on deconstructing economics as an academic specialism. This attitude was clear from the moment she breezed onto the stage and sat on its top step, engaging at eye level with the audience.

It was the first time I’d heard Kate reflect on her work with businesses, depicting in amusing detail the “schizophrenic” standoff between ‘how much value can I extract?’ versus ‘how much value can I generate?’ She argued that the 21st century solution lies in becoming “generative and distributive by design” – where our conception of the ‘circular economy’ sheds its last sense of linearity and acknowledges the networked whole. Kate gave an extremely grounded explanation of what this moment would look like, including examples of recent success stories and the structural shifts that need to take place in the supply chain.

Kate’s invitation to “develop our own economic theories” made her the perfect partner for Meaning’s artist-in-residence for the day, the theatre-maker Zoë Svendsen. The pair went on to have a ‘research-in-public’ conversation at the event, part of a participatory arts practice influenced by Ha-Joon Chang’s notion of ‘active economic citizenship’. Their dialogue, “imagining possible futures in the context of climate change,” evolved into a day-long artwork involving the whole Meaning community.

Meaning 2017 had plenty of other great reflective moments; most memorably, Margaret Wheatley’s talk on restoring nobility to leadership, and Kyra Maya Phillips’ reminiscence of the black market entrepreneurs she met researching her book The Misfit Economy. I was unexpectedly touched, however, by the measuredness and humility of the man I had previously considered the ‘rock star’ of blockchain, Vinay Gupta. 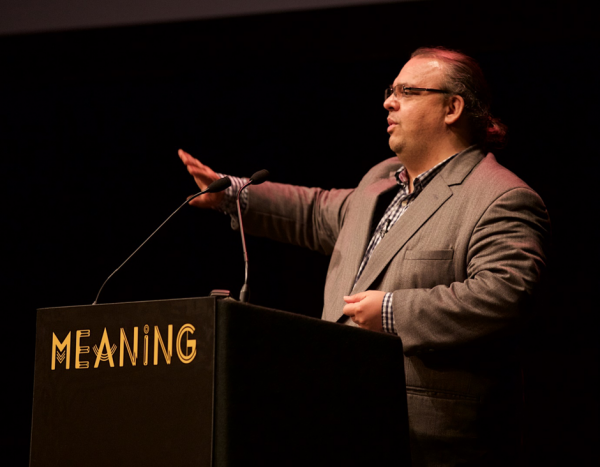 There are few innovations as much discussed as blockchain right now – or as little understood. It is rare to find a speaker who makes the whole story intelligible to a non-tech audience, never mind one who cuts through the ‘Bitcoin evangelism’ like Vinay does. The cultural moment of blockchain is one of an accelerated divide between ‘crypto-natives’ and the rest of us, and it often feels that this is moving too rapidly to properly examine its political and historical context.

Vinay faced the phenomenon head on, naming this the ‘bridge generation’ and likening it to the Wright brothers’ discovery of flight – noting that it was then only 50 short years until we saw the global system of air flight we know today. For Vinay, we are still “at the motorbike with wings stage of blockchain”, but it will not take nearly as long for it to be recognised as an equivalent epochal moment. He is on guard, however, against its claims to utopianism.

After 12 years as a humanitarian specialising in disaster relief shelters, the technologist and ‘global resilience guru’ had come to the conclusion that he could not locate the global systems required to solve climate change and the global refugee crisis. It was from this unashamedly ‘realist’ perspective that he went on to try and create them, emerging as a pioneer of blockchain’s second generation, Ethereum. This new wave in the cryptocurrency world asks what might be possible by programming the blockchain; creating new global architectures closer to the conception of a legal contract than Bitcoin’s limited ‘standing order’ capability. There might then be an opportunity to solve problems “above the pay grade of the nation state”; while guarding against the power grabs inherent to the crypto-world and providing a real opportunity to undertake collaborative global projects.

Mark Stevenson’s philosophy of ‘pragmatic optimism’ actually turns out to be the perfect assessment of the day: a conference focused on collaboration, creativity and humour, while soberly reflecting on the long-term future. Discussion continued long into the night at the Meaning after-party, which – along with the first-ever ‘Meaning Fringe’ – will hopefully become a permanent fixture on the Brighton conference calendar.

All photos by Clive Andrews