The Yes Yes Company is on a mission – to make vaginas happy. Founded in 2003 by Sarah Brooks and Susi Lennox, the company is changing the world from the inside, by creating a certified organic, natural range of intimacy products. Lucy Chesters caught up with co-founder Sarah Brooks to talk Viagra, vaginas and vegan lubrication…

Viagra hit the market in March 1998, and the little blue pill which could restore sexual vigour in men with impotence and erectile dysfunction was an instant game changer. With the promise of the sexual encounters of their youth available in just 60 minutes, many men took the plunge and opted in; hoping that the pill – which was originally designed to treat hypertension and angina – would revitalise their sex lives, and inject some passion back into their marriages.

However, with anything that sounds too good to be true – it usually is just that.

“I was working with Pfizer when it launched Viagra,” says Sarah Brooks, co-founder of The Yes Yes Company, the UK-based organic intimacy company (YES). “There were the usual documented side effects of Viagra, but there was one that could be called a social side effect.

“I heard there were letters to the New York Times from angry Viagra wives who were in their 70s, whose husbands had come home with a little blue Viagra pill wanting to make love and they hadn’t made love for maybe 15, 20 years – they physically couldn’t.

“So, their husbands ran off with much younger women, wanted a divorce and to sell the family home. And for these poor ladies in their 70s, their lives were ruined. These ‘Viagra wives’ felt their lives had been ruined by Viagra.”

Brooks met her YES co-founder Susi Lennox when they were both working for the oil company Exxon, in the ‘80s. Following the devastating Exxon Valdez oil spill in 1989, and the company’s disastrous management of the post-spill communications, Brooks left.

“It woke up my ethical bones,” she tells me. “I left not long afterwards – it broke my heart that a company I rated so highly had handled the immediate aftermath so poorly.”

When it transpired that Viagra wasn’t turning into a magic marriage pill, Brooks decided to investigate.

“It occurred to me as: ‘Gosh, what’s the problem here? There’s clearly not a solution for [the women] at the moment,’” she says. “‘Why don’t they just go buy some KY?’ Which really showed my ignorance at the time.

“But that became the germ of an idea that Susi and I discussed a lot and we decided to investigate what was on the market and what the issues were. As a result of that, we went to Bali for six weeks to work out how to create The Yes Yes Company together.

“We needed to work out how we would create a business together; how we would stay friends through doing that; what our value set was; what the mission would be, and our vision. We needed to do that without interruption and do it somewhere that had great personal resonance for both of us. And we did, we spent six weeks going through all those things. What’s the point in creating a business if you’re not going to change the world with it?

“Susi thought that two women might not be able to change the world. So, she suggested we modify our mission by saying that we want to change the world from the inside – so, that’s our combined mission,” says Brooks. “We do that by creating side effect-free, body matching, and natural intimacy products. Everything had to be certified organic as third party proof that our products are natural, pure, sustainable and environmentally sound, whilst supporting organic agriculture. We demonstrate our care of people by creating products that match and support human physiology. We care about the planet, and so create products that work with the environment; all our products are plant-based with no animal body parts in them.”

With its largest customer base in the UK – due to two of the YES product range being available on NHS prescription, YES VM and YES WB [vaginal moisturiser and water-based lubricant] – the company also exports to 96 countries, has distributors in another 35 countries, and is currently in the middle of an American retail launch.

“In the beginning, when Susi and I were launching our product range, we were still wondering about the Viagra wives and we began to discover about vaginal dryness and the menopause, and vaginal atrophy,” says Brooks.

“We realised that there was a really important need for a product that is safe to use daily, for comfort. Some women are in such discomfort that they are unable to walk or sit down without experiencing extreme vaginal burning pain. YES VM [vaginal moisturiser] is that product. It’s slightly less than pH4, to bring the vaginal pH down if it’s risen; which it probably has if atrophic vaginitis is being experienced. It’s become our fastest selling product in the past two years.”

Vaginal atrophy (or atrophic vaginitis), is the thinning of the vaginal walls due to decreased oestrogen levels and is one of the most common issues for women post-menopause. Women with vaginal atrophy have a greater chance of chronic vaginal infections, urinary function problems, and painful sexual intercourse.

“If you track back to Pfizer and the Viagra launch; I don’t think that it crossed their minds that the women wouldn’t be able to make love. The men – who wanted to make love again – didn’t know; and it wasn’t on anybody’s radar that there might be an issue with menopause and vaginal health, or that it could be a physical impossibility for these women. It’s that unfortunate adage: ‘use it or lose it’ – they had lost it, and there was no way it could come back all that quickly or easily.”

So, what is it exactly that makes YES’s products so unique? And why is it the first choice for women once they reach menopause? One of the topics on the agenda on that Balinese beach back in 2003 was the product’s appearance. Both Brooks and Lennox agreed that they wanted to avoid the “smutty” Page Three vibe that a lot of other brands were coveting, and instead opt for classy, elegant packaging which was much more deserving of YES’s internationally patented and award-winning formulas. Respectful language was included on the packaging.

But the most important aspect of YES’s products, is the science.

“Almost all old-style lubricants are made with chemicals – such as acrylonitrile, glycerine or poly glycols. What that means for vaginas and its mucus membranes is… Do you remember osmosis?” asks Brooks.

“Osmosis is where water moves through a semi-permeable membrane – like a vaginal epithelial cell – to dilute what it can on the other side and make it even. Osmotically neutral is when the concentration on both sides is the same. So, if you make a lubricant with lots of glycerine, which is also known as a complex sugar, what it’ll do is pull water out by osmosis from the surrounding tissue.

“Now, on skin, this is great – glycerine is produced by our bodies and it’s wonderful. But mucus membrane doesn’t have that layer of skin; it’s much more fragile. And, if the concentration goes above 20% of glycerine, you can get irritation of the vaginal mucosa. If it goes above 40%, you can begin to get cell damage – the epithelial cells can break down. And if it’s a lubricant, the issue there is obviously that you don’t want damage to the walls of the vagina, but you’ll also get potential for the easier transmission of STDs”, says Brooks.

“One of my personal hates of industrially produced glycerine is that it’s often called vegetable glycerine – which doesn’t make it any better because it’s usually produced as a by-product of palm oil production. So, in many ways the old-fashioned chemical lubricants are damaging the wider environment and are damaging our internal environment as well.”

YES creates all of its water-based products using water-holding bio-adhesive plant polymers instead of traditional glycerine, glycols, mineral oil or silicone based formulations – which can be irritating to mucosal tissue. Its products are also vegan and are certified by the Vegetarian Society. 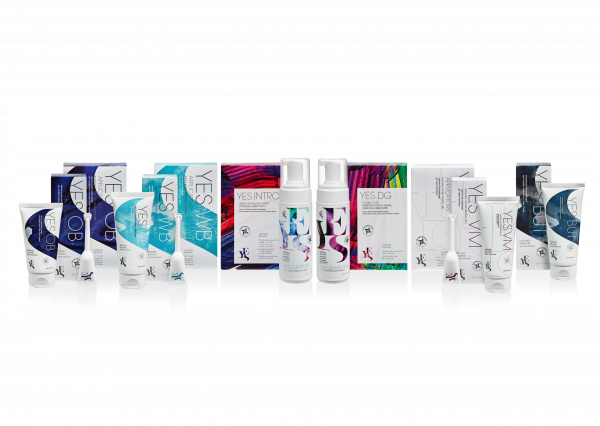 It’s been 21 years since the birth of Viagra, and the taboo surrounding the sexual health and intimacy of women once they reach menopause, still abides.

“I never felt finished at 40. I was very clear that life began, for me anyway, at 40. But we are fighting those kinds of clichés. The Viagra wives at 70 hadn’t ‘given up with all that nonsense’, which is probably what my mother would have said. It’s not necessary anymore to think like that or feel like that – it’s important to encourage any woman at any age to enjoy her sexuality; to reclaim it,” says Brooks.

“It’s about smashing the taboo that if you’re old you’re not up for it anymore, can’t do it, or don’t want it. We have the most amazing Yestimonial (YES testimonial) from a couple, who were thanking us for our products and how they had enabled them to keep making love even though they were both over a hundred.”

YES’s products are not exclusively aimed at menopausal women either, as vaginal atrophy can be experienced by any woman no matter her age, and can be a result of breastfeeding, after the surgical removal of both ovaries, after chemotherapy for cancer and from taking certain birth control pills.

“Our products are for anyone who makes love with their partner or on their own. We understand we are what we eat, and we are beginning to understand that we are what we put on our skin. As millennials come through with a stronger view on environmental health, you are what you put in your vagina is becoming so much better understood.”

YES launched its #StillSexy campaign at the This Morning Live show in May 2019 as a menopause awareness campaign which encourages women to take control of the conversation around ageing. It’s all about breaking the taboo around female sexual health and intimacy once we reach menopause. It’s about creating a safe space where women can feel confident, sexy and strong – no matter their age.

“Recently, there’s been a lot of discussion about menopause and about hot flushes. Nobody talks about vaginal dryness. There are various statistics, but about 60-80% of women will experience vaginal dryness as they go through the menopause – and nobody talks about it,” says Brooks. “I don’t think many people can talk about vaginas yet, but we do.”

Aside from the, literally hundreds, of glowing Yestimonials on YES’s website from couples, individuals, healthcare professionals, psychosexual therapists, gynaecologists and oncologists; it’s worth taking note of the company’s green credentials. As well as being certified organic, vegetarian and vegan, the YES range are oestrogen-, paraben- and glycerine-free, as well as being pH-balanced, iso-osmotic, and are internationally patent protected. Everything that Brooks and Lennox have created, has been born from a love of people and the planet; and through the sheer determination to create good, from the inside out.

“Treading lightly on the planet is something that really matters to Susi and I,” says Brooks.

“During this climate crisis, we have to farm to get food – we must look after the planet as we do it. We support organic agriculture to make sure that this planet can feed everyone on it, without trashing it for all life on it. It’s about being mindful of our actions, not least designing products that are side-effect free shows this particular industry that it really can and must change.”