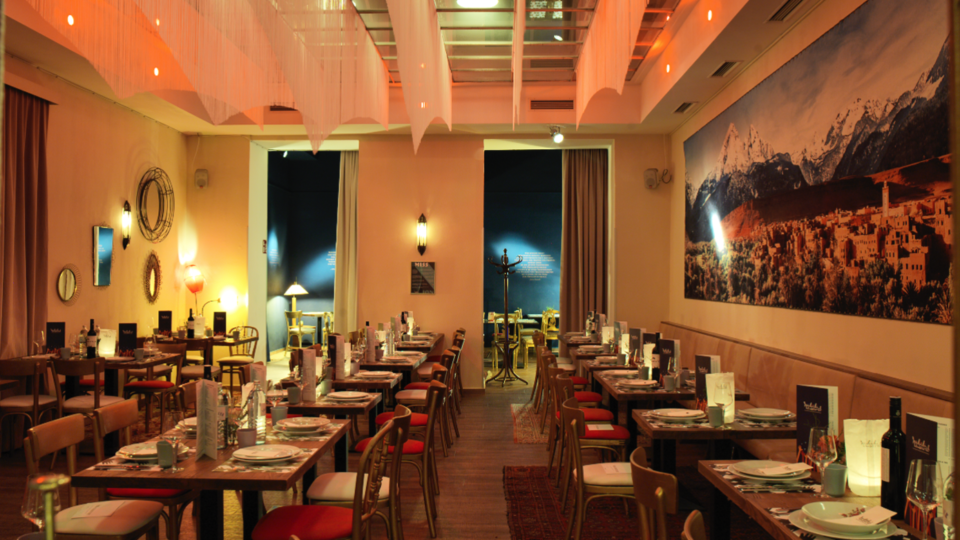 Habibi & Hawara in Vienna, Austria, is a restaurant and integration project aiming to turn refugees into entrepreneurs. Astrid Hofer caught up with the founders Martin Rohla and Katha Schinkinger to talk fusion food, right-wing populists and the duo’s guiding principle that “every challenge is a hidden chance” …

Egyptian sesame falafel, pumpkin goulash, hummus and tabbouleh – the traditional Syrian salad prepared with bulgur, lots of parsley, onions, tomatoes and mint – Habibi & Hawara is just a short stroll from attractions such as St Stephan’s Cathedral, and heaven on earth for everyone with a weak spot for Middle Eastern cuisine. The unlimited lunch buffet, an all-time crowd pleaser, offers an extensive selection of traditional fares with an Austrian twist, whilst at the daily ‘family dinners’, up to 15 dishes are served tapas-style, perfect for sharing at the table. But Habibi & Hawara, immediately recognisable by its bright blue façade, is more than a local favourite for a yummy feast. It is Austria’s first and only restaurant almost entirely run by refugees.

“Two thirds of our staff have a migration background, with the majority coming from Syria and a few from Afghanistan,” says social entrepreneur Martin Rohla, the mastermind behind the foodie paradise. Rather than just a regular restaurant, he describes Habibi & Hawara as an integration project, bringing together newcomers with locals over delicious food, while training them to start and run their own businesses in Austria. “Our ultimate goal is to turn the refugees into entrepreneurs,” he says. “We teach them everything they need: from common German to gastronomy specific vocabulary, accounting and management skills. We have our own language teacher, business coaches and a social worker.” Co-founder and restaurant director Katha Schinkinger, a former PR professional, explains the name (and logo) of the unique joint venture: “Habibi means ‘friend’ in Arabic and Hawara ‘friend’ in Viennese slang.” What’s more, both have the same roots, as the word ‘haber’ also stands for ‘friend’ in Hebraic.

The idea was born in late summer 2015, when the peak of the so-called refugee crisis saw an estimated million people flee their homes in Syria and its neighbouring states, making their way to Europe and seeking asylum mainly in Germany, Austria and Sweden.

Rohla, who also runs eco-farm and countryside club, Stadtflucht Bergmühle – just north of Vienna – started inviting refugees from the nearby camps such as Traiskirchen, the largest one of its kind in Austria, heavily overcrowded at the time. “Katha, me and some other friends came up with the initiative ‘Hosten statt Posten’, meaning ‘hosting instead of social media posting’. We hired buses and drove groups of refugees over for a day, serving them a healthy lunch while introducing them to locals.” Originally planned as a one-time event, the group ended up hosting more than 1,300 newcomers within a two-month period.

Rohla and his wife took a Syrian family under their wings. “They stayed with us for a year. We made sure the kids got into school, the parents found jobs. Living together was a great experience for all of us, we constantly learnt from each other and we are still friends to date.” But it wasn’t just enrichment on a personal level. “Many of the refugees we got to know turned out extremely well-educated and skilled. We saw a lot of entrepreneurial potential in the people,” says Schinkinger, explaining the challenges newcomers to the country commonly face: “Apart from the language barrier and the cultural differences, they struggle to enter the job market. The average time it takes for a refugee to just find a job in Austria is about four to five years. Opening their own businesses would take even longer. Our idea therefore was to build up a company that serves as an incubator for entrepreneurs.”

Habibi & Hawara started as a pop-up and moved to its current location in May 2016 with 15 full-time employees, including an Austrian and a Syrian chef, and space for up to 100 guests. The number of staff has since doubled and the seats tripled, with the unique menu – more than half of the dishes plant-based – attracting everyone from students to celebrity guests.

Syrian born Mohammad Aljassem, who was trained as a chef in his hometown Deir al-Zour and later cooked at a refugee camp, recalls two of the most prominent names he has catered for since: UN secretary general Ban Ki-moon and Austrian president Alexander van der Bellen, with the latter celebrating his inauguration at Habibi & Hawara in early 2017. “The president showed up without any police protection or security staff,” the 29-year-old says. “I was very surprised because there’s no way this would ever be possible in Syria.” 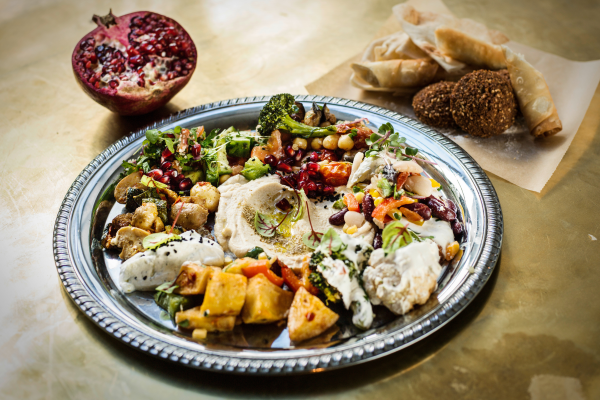 Despite the restaurant’s popularity with gourmets and A-listers from day one, it hasn’t always been smooth sailing. During the first two years, Habibi & Hawara heavily relied on private donors, many of them friends and family of the founders who believed in the concept and became shareholders. “It wasn’t an easy walk,” Rohla confirms. Yet, he decided against applying for state funding of any sort: “We want to run a sustainable business – and a business that doesn’t make money is not sustainable.”

The long-term solution was to expand. The original Habibi & Hawara got an outdoor patio as well as additional seats in the next-door building and reached profitability in autumn 2018. Within the next 12 months, up to four entirely new restaurants will pop up in different parts of Vienna, all under the same brand and with refugees as co-shareholders. The second Habibi & Hawara will open in November 2019 in the so-called Nordbahnviertel – a newly-created area in the second district – followed by a third one in April 2020 on Siebensternplatz – a hipster hotspot in the seventh district. Further locations are still under discussion. On top, the team plans to establish a social franchise system for small food takeaways – all run by refugees that were trained at the original flagship store. A recent online campaign raised £455,000 for that later venture, mostly invested by dedicated fans of the fusion food brand looking forward to lunch spots around their homes and offices. With the most popular salads, spreads and starters available at 75 supermarkets around the city since this summer, the company spreads its wings even further and makes the brand more popular.

But the story doesn’t end here. “We want to turn Habibi & Hawara into a national, maybe even an international brand,” says Rohla, who believes that “every challenge is a hidden chance”. When asked if he sees the rise of right-wing populists in Austria and all over the world as a potential risk both to his business and his refugee employees and friends, he shakes his head. “Even though we did face the occasional backlash when we started out, I see them as a help rather than a threat. The more radical and successful they become, the more people that oppose them will get together and organise themselves. In five to ten years, all the Donald Trumps and Boris Johnsons of this world will be outrun by the counterweight.”