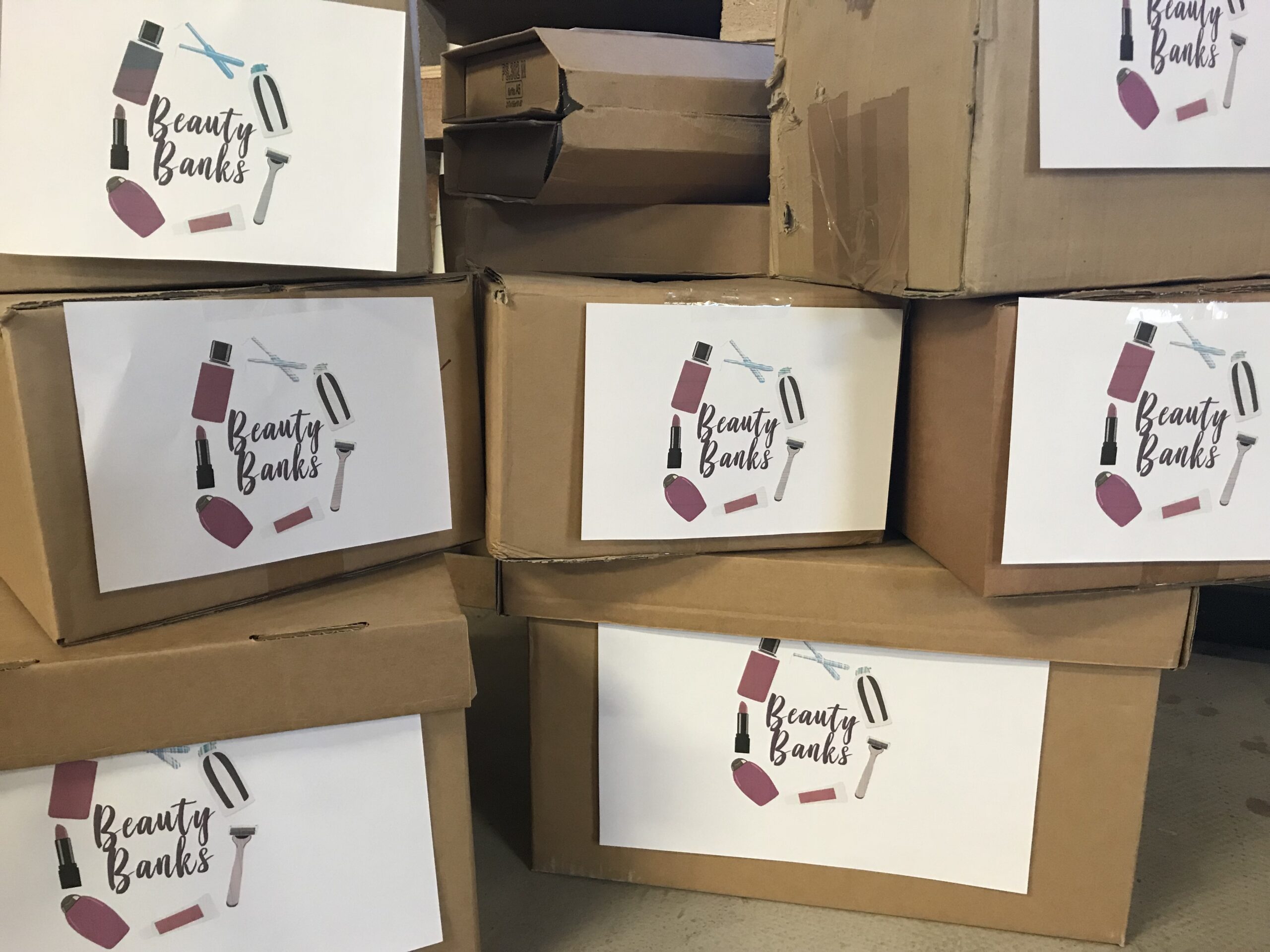 Providing sanitary products and cosmetics to those unable to afford them, Beauty Banks are like food banks, but with beauty essentials and toiletries, instead. Emma Jones spoke to the Beauty Banks’ Jo Jones, to find out why the banks are crucially important, and how you can help…

When I rise in the morning, I hop into the shower without even a thought. I claim washing my hair to be a chore and brushing my teeth to be a minutia of everyday life. However, for a vast majority living under the poverty line, clean teeth and healthy hair are a luxury only to be dreamed about. There are too many people in Britain that are unable to afford an array of hygiene essentials – forced to make the choice between feeling full or feeling fresh.

I believe feeling clean to be a right not a privilege, so with the help of my good friend and co-founder, Sali Hughes, we started to lift the lid on hygiene poverty. We launched the social enterprise, Beauty Banks, a community powered movement that supplies personal hygiene products to people living in poverty in the UK. People who otherwise wouldn’t be able to afford items such as shampoo, soap, shower gel or toothpaste because they have no choice but to prioritise living costs and food expenses.

We were motivated into action after several situations which all highlighted the mass scale of hygiene poverty. Myself and Sali both know of teachers who bring sanitary products into their schools for students whose families can’t afford them, this stops students skipping school and missing out on their education. My office helped at a local food bank in the aftermath of the Grenfell Tower tragedy and I instantly became aware of the demand for hygiene essentials at food banks. Sali became aware of the same demand for toiletries in homeless shelters when she volunteered at one in Cardiff.

All these situations struck what a pressing issue this is all over the country and burned a need inside to make a change not just to hygiene poverty but to period poverty also. As well as providing Beauty Banks parcels to charities in need – we now have a higher purpose. We’re part of a committee who are working with the shadow government to lobby for free sanitary products to be available in schools and colleges across the country. No girl should miss out on her education because she can’t afford to buy a tampon or towel. The Scottish government has already implemented this policy, but the British government is lagging behind and failing to do anything to address the issue of period poverty.

The current issue regarding all types of poverty is spiraling upwards. The statistic which highlights that there are 14.2 million people in the UK living in poverty is incredibly harrowing alone. However, there is a further 2.5 million living only 10% above the poverty line – meaning any change in their circumstances – being made redundant for instance or finding themselves ill and unable to work – can drive them into poverty. By 2021 roughly 35% of all minors in the UK are predicted to be poor, indicating that we’re also in the midst of a child poverty crisis. In the Merseyside region alone more than 80,000 children are growing up below the breadline. The situation is getting worse and expected to hit new highs when Universal Credit is fully rolled out and when Brexit is realised, which is why it is so important that we keep pushing Beauty Banks forward and attempt to tackle as much poverty as possible. 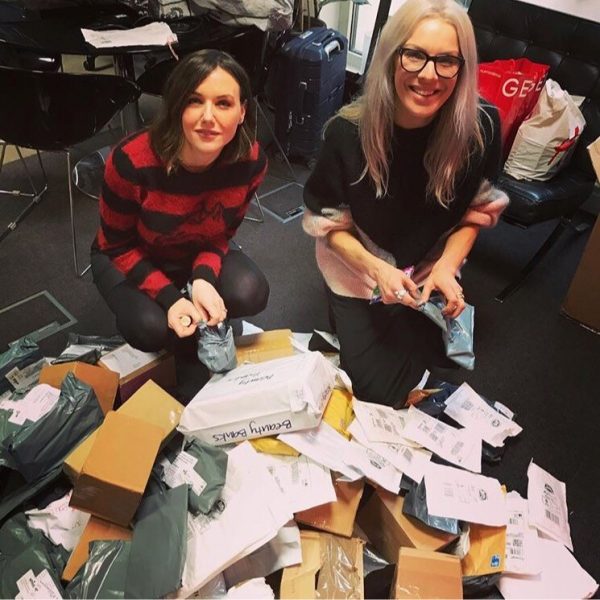 Sali and Jo of Beauty Banks

Sparked by the stories which we had heard and the statistics that we face, we got started straight away. We posted our logo on Sali’s Instagram with our mission outlined on the post – which was to help those living in hygiene poverty in the UK by supplying essential toiletries to registered food banks, homeless shelters and high schools. We’ve been overwhelmed by the number of people who have got in touch offering their help. Whether that’s donating parcels to Beauty Banks or delivering parcels across the UK. We also have volunteers who open and repack parcels, to make sure that every product that gets distributed is unused and is categorised according to product type, so it is easily accessible to the charity.

So far, we have served around 80 charities across the country, since we launched in February 2018. Some charities we can reach more than others thanks to the dedication of our volunteer drivers but there are still many places which we are desperate to help, but can’t reach. The main struggle we face is the cost of deliveries, we have zero budget for distribution, so are forced to heavily rely on our network to help get parcels passed to where they need to be. This is a huge obstacle in extending the movement and reaching the farther and wider across the UK, but we are determined to hurdle over any obstacles and get donations in the hands of those who need them most.

We started to collaborate with big brands which really drove the movement forward and allowed us to help people in those hard to reach places. Health and beauty retailer, Superdrug came to us with the idea of donation bins in its stores and made it happen in a way that we wanted it to work. We now have an amazing partnership with Superdrug which services Manchester, an area we were desperate to help, but struggled to reach. So far, we have partnered three Manchester food banks with three Superdrug flagship stores in the city. Each store has a Beauty Banks ‘donation bin’ and when it’s full, a volunteer from the food bank will go and collect the donations. So, what’s given in Manchester, stays in Manchester. This is a scheme we’re extending to Scotland in January and have plans to roll the scheme out in other areas around the UK after that.

We also partnered with Easho – a new, small e-retailer ran by two incredible women who want to do more than make money – they have a higher purpose and a decency that runs through their bones and the DNA of their company. We found each other via Twitter and now because of our partnership, people wanting to donate have the option to purchase from our Easho wish list. Whatever they choose is delivered directly to us at Beauty Banks HQ and with only a click of the mouse, they have made such a positive impact on somebody’s life.

We have mainly marketed the campaign and raised awareness through Instagram, it’s our main channel of communication and where we initially launched Beauty Banks. We rely on social media to help us secure donations, spread the word and also to share where donations are going – it’s important to us that the people who donate know who they are helping. We both have incredibly supportive friends in the media who have editorially supported Beauty Banks which has been priceless help in sharing the importance of our community powered movement. All the marketing has led to an overwhelming reaction from the public. The outpouring of donations, offers of help, and volunteering has taken us by surprise because of the sheer magnitude of people’s excellent-ness. The high volume of support we have had makes it difficult to pin point our proudest moment but the best thing about the campaign is doing something useful and something practical to help people in poverty. We aren’t changing the world but it’s very likely that we have changed the world for somebody. Feeling clean creates a feeling of confidence and the toiletries and cosmetics which we donate can massively impact a human being’s self-esteem and pride. Further to that, a higher self-esteem can lead to employment opportunities and employment opportunities can eventually lift a person above the poverty line.

Our next mission is to scale, not scale as an organisation, but in terms of reach. We want to reach further in the north of England and southern England and everywhere in between that needs the support.

The next city we have our sights on is Liverpool, the need is so great but it’s somewhere we struggle to deliver goods to. The main obstacle in our way is funding but we’re building a model that will allow any individual, brand or workplace to be a Beauty Bank rep, and activate their own collections in their area to donate locally. The idea being that you log-on and download a ‘Beauty Banks pack’ that gives you all our assets and messages and you can crack on. Our aim is for Beauty Banks to be a people powered movement that is driven forwards by those who share our values and our mission and want to make a difference.

Anybody can be part of the movement to significantly improving somebody’s life. It is so easy to get involved, the next time you hit the supermarket throw an extra tube of toothpaste or a second bar of soap in your shopping trolley and be sure to swipe them hotel miniatures before you check out. Pack your products into a box, write ‘Beauty Banks’ on every side and post here:

You can also make a difference by purchasing from our wish list on Easho or setting up your own Beauty Bank donation branch in your workplace or school.