With the UN predicting that we will need the equivalent of two extra planets to feed an ever-growing population by 2050, Lucy Chesters looks at innovations and experimentations in sustainable food production. Is urban farming the way forward? Will humankind one day rely on eating insects? Or, will growing food in space be the final frontier? At Oslo Innovation Week 2017, we discussed them all...

We live in a world of waste. Plastic waste, water waste and food waste, amongst others, are growing concerns the world over, and are some of the issues that the UN aims to tackle and eradicate through its 17 Sustainable Development Goals. The global goals, which were outlined in the COP21 in Paris in 2015, went on to form the backbone of the Paris Climate Agreement and were agreed upon by 196 international leaders in a landmark commitment to combat climate change.

But it’s not just the world’s waste that’s becoming an ever more pressing issue; sustainability is at the heart of the UN’s 17 global goals, and sustainability has been one of the biggest issues discussed at this year’s Oslo Innovation Week (OIW). One key theme of the week so far has been food sustainability; how do we ensure that our current food production methods are sustainable enough to ensure that food for future generations is guaranteed?

UK scientists have predicted that there are less than 100 harvests left in the country’s soil as a result of intense over-farming. Water scarcity is a growing problem in hotter climates the world over, with the resulting arid land making crop growing impossible. Biodiversity offsetting – the destruction of formerly lush greenery and natural resources, and replacing it with replica nature elsewhere – has destroyed the soil’s ecosystem, globally. An ecosystem which takes years to recover; soil nutrient replenishment is a very slow process, and could take thousands of years to heal. And alongside all of these issues, there’s the social issue. Humans need food for survival; but if that food is, one day, simply unavailable – what then?

“You can’t have peace if people are starving,” says Dr Ragnhild Nilsen, head of Nortura – a farming cooperative which is owned by 19,000 Norwegian farmers.

Founded following an epiphany of Nilsen’s when she was visiting a spa and questioned ‘who made my towel?’ – the answer: nobody knew. Nobody could tell her the source of the materials used to create the towel, and the human impact that the creation of such an everyday object has, on the workers worldwide who make them. What followed was a comprehensive campaign which championed transparency and fairness in the supply chain, and led to the creation of Nortura. In her speech at this year’s OIW, Nilsen touched upon the “four keys to sustainability”, four ideologies which every company should hold at its heart, if it aims to become sustainable.

“The first key is fair,” says Nilsen, “companies can’t claim to be fair, if they’re not paying fair wages to their workers.” Nilsen went on to explain how fairplay was at the heart of cooperatives worldwide, and likened corporations who don’t pay fair wages, to the act of competing with somebody who isn’t on a level playing field. “Is it really a victory, if you’ve won against someone who isn’t your equal?”

The following three keys to sustainability success are ‘attract’, ‘innovate’, and ‘respect’. Attract good stories; Nilsen referenced Fashion Revolution, and commented, “The hashtag #whomademyclothes has been crucial to fashion industry transparency, following the Rana Plaza tragedy in 2013. “We can do the same with farming.” Innovation is key to sustainability, “do the usual things in a new manner,” she mused; and finally it’s all about respect, “respect is all about balance.” If respect were a key ingredient of global cooperation, we wouldn’t be facing the issues that we have today, in the same way. 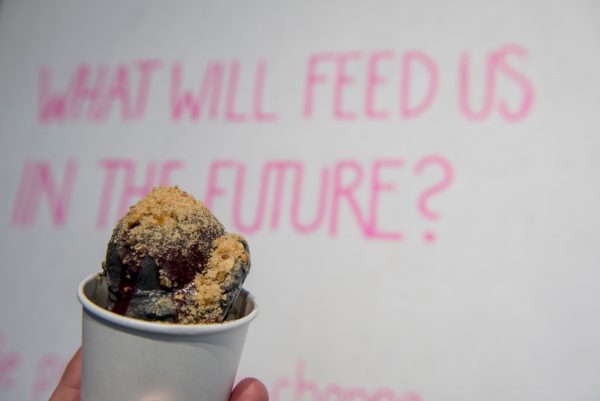 Innovative and speculative answers were put to us throughout OIW; can we utilise ocean forests to harvest our food? Is eating insects the best way of feeding a hungry population of people, which needs proteins to survive? On offer to us at OIW was charcoal ice cream, topped with caramelised buffalo worms – not everyone’s cup of tea, granted, but it’s experimentations and innovations such as this, which will normalise the process. And, anyway, it’s already a thing in Switzerland; demand for insect based produce saw the stores sell out of it quicker than they could restock it. Was it the novelty factor? Or is there real demand there from consumers? Only time will tell, but not everyone shirked away from it, and that has to be a positive.

We considered urban farming. Are city-based farms the way forward, as more people move to urban areas to live? The UN has predicted that we will need the equivalent of two more planets to feed the growing human population, which will hit nine billion people by 2050. Which leads me onto growing food in space… Can it be done? Well it’s happening, and at OIW, we heard from the woman behind it all.

Ann-Iren Kittang Jost, is the head of the Centre for Interdisciplinary Research in Space, which has been experimenting with next-generation plant cultivation, and has been growing crops in controlled ‘anti-gravity’ conditions. Is space really the final frontier for food? It sounds like something straight out of a Douglas Adams novel, and who knows, maybe one day the restaurant at the end of the universe might not sound so farfetched…