Lee-Sean Huang is a Taiwanese-American designer, community-builder and educator, based in New York City. He talks to Andrew Beattie about B Corps, inspiring books and Bruce Lee.

I am the co-founder and creative director of Foossa, a community-centred design and strategy consultancy. We use experience design, service design, and storytelling to foster conversations and actions that lead to social and cultural transformation. I have also taught courses at the intersection of design, business, and social innovation at universities including New York University, Parsons School of Design, and the School of Visual Arts. On top of all that, I am also a practitioner and teacher of capoeira, an Afro-Brazilian martial art disguised in dance. 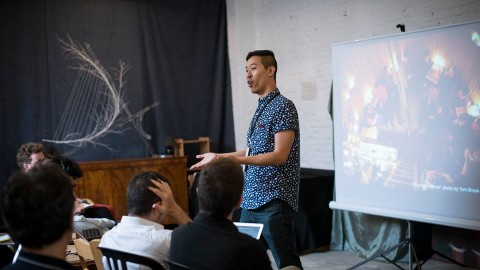 While I am based in New York City, I have had the privilege to work on projects in Europe, Asia, Africa, and Latin America as well.

We have been working with the Parsons School of Design, Citi Community Development, and the City of New York on Design for Financial Empowerment (DFE), a project that explores how service design can be used to make public sector financial empowerment services more effective and accessible.

I recently discovered Taiwan Bar through their educational videos on YouTube. They are a new media production studio and creative agency that makes socially-conscious educational programming with a focus on Taiwanese culture and history. They have a wonderful aesthetic and youth-oriented voice.

As a Taiwanese-American who grew up and has lived most of my life outside of Taiwan, I found the videos really inspiring, and they have helped me better reconnect with my heritage and better understand our history. A lot of this culture and history was suppressed when my parents were growing up in Taiwan under a military dictatorship from China that ruled the island under martial law for decades.

I would love to collaborate with Taiwan Bar to do something for a broader international audience, to help build our country’s soft power in the world and to tell the story of our peaceful struggle for democracy and self-determination. I encounter a lot of confusion and misconceptions about Taiwan here in the US and in my travels, so we have a lot of work to do in sharing our stories with the world.

Yancey Strickler, Perry Chen, and Charles Adler, the co-founders of Kickstarter, inspired me when they announced that their company would be reorganised as a benefit corporation. In doing say, they enshrined a formal legal and organisational framework that would protect the company’s ethical principles from the profit demands of shareholders.

Bud Caddell of NOBL also inspires me. He recently announced in a Medium post that the consulting company that he founded and owned would be converted into a worker-owned and controlled co-op.

Daniel Anthony and the team at Mana Ai in Hawaii are doing some amazing things there with their artisan poi and pa’i’ai, traditional Native Hawaiian taro products. They are working on building a sustainable food system in the islands and reviving and advocating for traditional food cultures.

1. Bruce Lee Podcast: Bruce Lee’s daughter Shannon Lee and culture analyst Sharon Ann Lee (no relation) talk about the life and philosophy of Bruce Lee. Even if you aren’t a Bruce Lee or martial arts fan, the podcast goes into the philosophical side of Bruce Lee and is relevant for anyone interested in timeless wisdom the creative process.

2. Tribe: On Homecoming and Belonging by Sebastian Junger: Junger weaves together a story that connects returning veterans with PTSD and historical accounts of early European settlers who ‘went native’ and assimilated into Native American tribes. He then goes on to argue that our contemporary Western society has lost a sense of tribal belonging despite because of our affluence and cult of individualism. From there, you can connect the dots to understand the rise of alienation and symptoms like Brexit in the UK and the rise of Trump here in the States.

3. Malcolm Gladwell’s Revisionist History Podcast: It’s been a while since I have read any of Gladwell’s books, but his new podcast offers up some really fresh and inspiring material. Listening to Episode nine: Generous Orthodoxy, which tells the story of a former Mennonite minister who embraces his gay son and faces the consequences from his conservative community, moved me to tears. Episode seven: Hallelujah, which follows the long trajectory of the Leonard Cohen song of the same name, is an insightful view at the nature of iteration in the creative process, a must listen for anyone who makes things.

4. Between the World and Me, by Ta-Nahisi Coates: It seems like the news cycle in America is on an infinite loop of police killings of unarmed Black people, followed by protests, sometimes riots, and then more of the same. While history bends towards progress, race relations continue to be the open wound and unfinished business of our Republic. Coates shares his story and his truth in this unflinching and poetic work.

5. The Seventh Sense, by Joshua Cooper Ramo: Ramo’s book is the latest in the sub-genre of ‘making sense of networks’ books. While aimed at an elite business and public policy audience, Ramo is able to make dense and concepts fairly accessible. This book changed the way I understood the connections between everything from Wikileaks to ISIS to the global financial system.

What’s the book, books or author that most shaped their thinking for the work that you do?

As a designer working on building a socially-conscious, multidisciplinary 21st century practice, I still often refer to the 20th century greats: Victor Papanek, the Eames, Massimo Vignelli, who recognised the broad potential of design and reminded us of our responsibility as designers.

My work is also deeply influenced by the work and writing of my colleagues Jeremy Heimans and Henry Timms. They came up with the terms ‘old power’ and ‘new power’ to explain the political, cultural, and economic tensions that mark our times. According to Heimans and Timms, old power is static and institutional like currency, while new power flows like a current. They introduced the concept in a Harvard Business Review article and TED talk. They are also currently working on a book about new power.

My friend Christopher Chavez recently published a piece in Harvard Business Review with his co-author John Geraci about looking at 19th-century style barnraisings as a model for contemporary social innovation. It’s a great reminder to look backwards in time and around us in context while we move forward with innovation.