Authenticitys was launched in 2015 to champion educational exploration; uniting tourists and locals alike to create a sustainable tourism industry which has real social impact.

El turisme mata els barris: tourism kills neighbourhoods. It is not hard to find local resistance to Barcelona’s seven million-plus annual visitors, especially in the fashionable quarter of Gràcia, where anti-tourist sentiment is strong and the writing’s on the tan, stone walls; alongside skulls with selfie-stick crossbones. In a cafe nearby, Authenticitys founder Elena Rodríguez Blanco outlines her hopes to help reforge these attitudes — and upend the current tourism model — by tapping into the potential of tourists to have a positive impact on their destination. 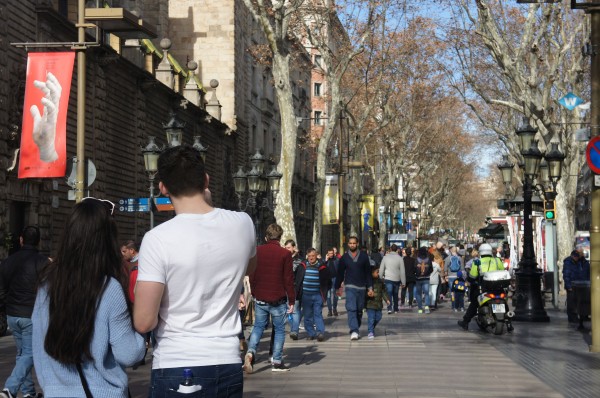 Like the millennial travellers it targets, Authenticitys is an online entity; a platform designed to aggregate social impact tours across Europe, and eventually, the world. Rodríguez Blanco says people are still a long way off actively Googling for social impact tours, but explains the concept as ‘a community of NGOs and social enterprises around European cities that are joining tourism with a social topic’. Each tour fits into one of six categories of social impact: health, environment, education, freedom and equality, happiness and local employment; ideals based on the UN 2020 Sustainable Development Goals.

Witnessing local causes trying to tackle some of Spain’s many issues was enough to jolt her into action, as she sought to redirect some of the global tourism industry’s trillion euro-plus expenditure. ‘Just here in Barcelona, for example, we have 14% tourist growth year on year, which is massive and creating a problem of its own,’ she tells us. ‘And then on the other hand, you have 17% unemployment, we have the beaches being degraded and destroyed and a lot of other things going on that could be improved; and there are initiatives to do so, but they are just not connected at all. So what I’m trying to do is connect them and create products so that people can come here, participate and leave the city better.’

In Barcelona, she faces the challenge of doing so against a backdrop of unsustainable growth, with residents considering tourists a bigger problem than urban poverty. The city’s mayor made headlines in 2015 by halting issuance of new accommodation licences; while noisy partygoers and AirBnB guests have become the bane of downtown residents. On top of this, she says housing and food prices are being driven up, average salaries are staying at €800-€1000 per month, and some neighbourhoods now cater solely to tourists’ needs.

Nevertheless, Rodríguez Blanco maintains that Barcelona needs tourism, and argues that it, like every city her network is operating in, has to focus not only on bringing the right visitors, but also pointing them in the right direction: ‘And if it’s not Authenticitys [bringing tourists], it’s a person blogging, it’s Tripadvisor, and it’s just a matter of time until everything is known in this city, because of the huge amount of people coming.’

Authenticitys has its roots in a Vietnamese NGO named Bloom Microventures: a social impact tourism project she co-founded in 2009. To this day, Bloom uses microfinance for poverty alleviation; running rural adventure tours in communities close to Hà Nội and investing the proceeds as credit for farming entrepreneurs. Her first taste of impact tourism saw her arrive back in Europe with the dream ‘using this powerful tool’ to replicate Bloom’s success in a city environment. After biding her time, she partnered with two Barcelona NGOs, and started prototyping, testing and iterating tour products; with Authenticitys taking its first tentative steps into the world wide web last summer. Tech-savvy travellers could choose from a Senegalese entrepreneur’s bike tour, which employs disadvantaged youth; or a combined paddle surfing/Barceloneta Beach clean-up experience.

Despite critics doubting, ‘Are people really going to pay to go clean up a beach?’, she says the reaction to the first official tours was promising. ‘Actually, what we found was that in the part when we were cleaning in the summer, random people from the beach would just come join… People want to do good, they just need to know how.’ Further proof of concept came from the popularity of Amsterdam Underground. The long-running tour employs ex-homeless guides, to give a glimpse into the life of those living on the streets of the Dutch capital, and is now one of Authenticitys’ newest partners.

Rodríguez Blanco noticed similar tours popping up through Europe, and on talking to the guides and founders, saw they had the same vision, but were struggling with marketing, management and, importantly, measuring their impact. ‘So that’s when I thought maybe we could be a company exchanging knowledge between the organisations, as well as bringing awareness to people as a collective, that this is a different form of tourism that is happening… You can do it in Barcelona, but also in London, and you as a tourist know where to find it.’

After a winter regrouping from the 2015 soft launch, Authenticitys is positioning for momentum, with plans to re-launch in up to ten cities by summer, with around 40 tours expected in total. Although Rodríguez Blanco has been the main driver of the project until now — supported by a host of passionate volunteers — the social enterprise’s ranks will swell to include a Chief Operations Officer, IT developer and marketer. This summer’s ambitions also include a United States visit to co-create learning journeys for universities and companies: week-long trips spanning three cities and five tours, calling on the knowledge of social innovation scene heavyweights like the Impact Hub and MakeSense networks.

Since tourism in already saturated destinations like Barcelona and Amsterdam is still growing, we asked her if today’s tourists are really looking for social impact? “So there is that feeling that people want to give back while they consume, for example, with local food and organic restaurants’, she answers, noting that Spain’s growth in sustainable options is thanks to visitor demand, ‘but this wasn’t really linked to the activities they were doing during their trip. When they are just visiting for a weekend, people are not looking to be Mother Theresa and visit an orphanage, but they are looking for something where they can have fun, get to know the city, meet locals; and if they are giving back, they are happy.’

It is too early to judge whether this is a winning formula, but Rodríguez Blanco is betting that it will take flight when people see the possibilities for enjoying themselves while having positive impact. ‘We’re a tourism social enterprise, but in reality we’re probably more of an education social enterprise. We want to tell the stories of change; the stories of hope that are happening around the city; and when people hear the stories, they want to live it and be part of it.’

But being a storyteller is not enough for the lecturer in entrepreneurship and innovation, and she has also started a university initiative called the Authenticitys Challenge. She noticed it was hard to simply teach theory in entrepreneurship — ‘People just have to do something, right?’ — so she designed a way for students to engage their entrepreneurial skills, by inviting them to find a problem where they live, and create an experience to help solve this.

‘And then they have to go and find tourists and locals and do it! Then, after that’s done, they have a few options: One, they can go and make the tour for somebody else to do. Two, they can run it themselves for the summer. Instead of doing an internship or working as a receptionist, why not do something cool to help the city?’

One thing the Authenticitys website and Challenge have in common is the emphasis on getting people to consider social issues in their own communities — not just in far-off destinations. ‘Responsible tourism right now is very much associated with developing countries,’ she says. ‘So people are already more used to going to third world countries and perhaps taking action there, but they are not connecting sustainable tourism with countries that are developed, or in our own cities or communities, as there are less initiatives for sustainable tourism here.’

Since each tour has a different social focus, Rodríguez Blanco says people can get an idea of the types of issues facing communities at their destination, before going home and considering tours in their own city, ‘even inspiring them to get involved with this kind of entrepreneurship’.

And this idea of using tourism to inspire change at a local level has been a driving force for Rodríguez Blanco all along. Although she had long thought of starting Authenticitys, her other projects took over once she had arrived back in Europe. Until one night she dreamed about it. ‘Which was a dream of a lot of people holding hands around Barcelona; tourists and everyone else. So I just knew I had to do it. Tourists and locals alike are the driving force of cities, and it was time to join these efforts to create real waves of change and transform travel.’