Bigga Fish is a London-based social enterprise, which provides a performance platform for young creatives aged between 14 and 25. As well as educating the next generation in events and marketing management, Bigga Fish provides the resources and opportunities for today's young people to believe in themselves and achieve their dreams.

Can you tell us the story of Bigga Fish and how it began?

Bigga Fish started back in 1999 as a way of engaging young people. The youth centre that I was working in at the time, told me that the police had visited the centre and asked to set up a surveillance operation outside the club – it struck me as being the totally wrong way to engage young people.

There were a lot of young people there that needed help, our solution was to set up a DJ workshop. We arranged celebrity DJs to come along and give workshops; we carried on this way until the kids started to question the point of the workshops, as they didn’t have a place to perform what they’d learnt.

That’s when we started organising events, which in turn has grown into us running programmes which teach the core message of Bigga Fish. Bigga Fish instils in young people the belief that they can do anything – they have the possibility to achieve anything that they want. We’ve been running Bigga Fish for 17 years now and we’ve seen over 300,000 kids come through our programme, across four cities.

Do you get students from a diverse range of backgrounds?

We focus on inner city young people – that’s our MO.

Tell us more about the Enterprise Club.

The Enterprise Club gives young people real hands on, business experience. It teaches skills in organising and championing cases; finding and understanding how to make money and generate enterprise.

We take them through a 10 session programme which culminates in them organising an event for charity or a fitness day, for example. Whatever they organise, it’s to help them to understand the process of putting things together and making them happen – they get the experience of implementing it, but they also learn how to generate income from their projects. 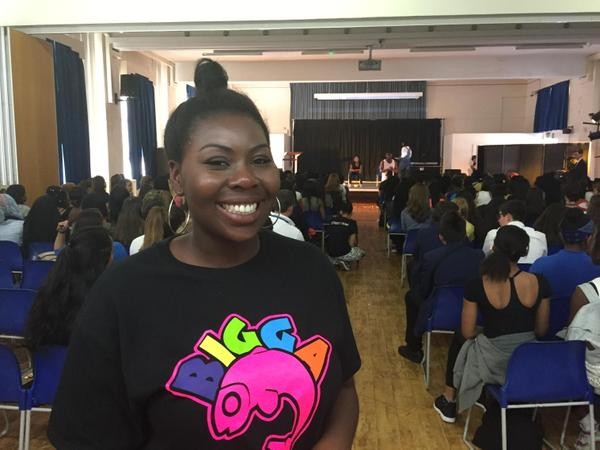 How did the relationship between Bigga Fish and the Start Up Loans company work?

We worked with the Start Up Loans scheme for two years as a delivery partner; setting up 125 businesses over that period, which focused on young people, and giving those people the opportunity to gain access to finance.

We received a 9/10 customer rating for quality assurance, and it was really successful. Unfortunately, the government changed the agenda of the scheme in the second year, and we didn’t see how it could work with first time business people – they wanted high growth businesses which already had access to finance.

That’s not a great scheme for us. At the core of Bigga Fish is: education, entertainment and enterprise. We’re the longest standing producer of teenage events in the country. For example, last year we ran London’s first culture festival in the Olympic Park, which was attended by over 5000 young people.

Why is being a social enterprise important for the work that you do?

We’re in a time where we’re forgetting what’s important – we focus on money and things like austerity and the value of the human spirit. We need to do our best as custodians and guardians of young people to ensure that there are proper services and opportunities in place for them to be able to flourish.

We need to make sure that the kids that are going to be taking care of us in the future have values, and have a safe and happy upbringing. Because if they don’t, then they won’t be safe and happy adults.

Have you found that there is a robust network of social enterprises in the UK which you can look to for inspiration and support?

The truth is, I think it’s in a quiet crisis. I find the network of social enterprises in the UK more and more fractured, and shrinking.

But I do think there’s some amazing work going on out there; some people doing some really great stuff, and that’s not to take anything away from them. I also recognise how hard it is, because everything is about output; we want more quality and more output for less money.

And it’s important for young people, who might just need a conversation. Winning the confidence and trust of young people takes time – and more importantly, trying to hold it is even harder.

Tell us more about life and work in the Trampery, and how it benefits Bigga Fish?

The Trampery is an excellent model, it brings together lots of different individuals and SMEs, and think that’s a really important mix, that’s what makes a city great or a culture great. The mix of things that happen from these relationships is a positive; the economy needs as much diversity in it, so that business models in the future can really have a chance to flourish, especially now that we’ve decided to leave the European Union.

There are two key things about being based at the Trampery, one is to provide a hotbed for new businesses and innovation and it’s also a resource for small organisations, helping them to overcome the challenge to then find space in an ever increasing property market.

Can you tell us more about Bigga Fish’s work with the BBC Urban Classic Proms?

One of the key things about Bigga Fish is we’re always trying to bring together different cultures – whether that’s diversity of people or the diversity of what they’re listening to. We saw that there was a real opportunity to bring together the resources of the orchestral world with the creativity and the imagination of the grime and urban sector.

We’ve worked over six years with the BBC in collaboration with Serious, and together we’ve achieved a really phenomenal thing with the BBC Urban Proms. It meant that orchestral music was played live for the first time on Radio 1 in its 45 year history.

Tell us some of the student success stories – who’s passed through the doors at Bigga Fish?

We taught N-Dubz how to DJ, before they became N-Dubz.

We want to encourage everyone to find some young people that they can mentor and they can help in some way. Young people definitely need support and guidance in this time, and they’ve also got lots of really valuable knowledge and experience, that adults nowadays just don’t have.

That’s the thing with Bigga Fish – we always recognise young people as being equals to us.