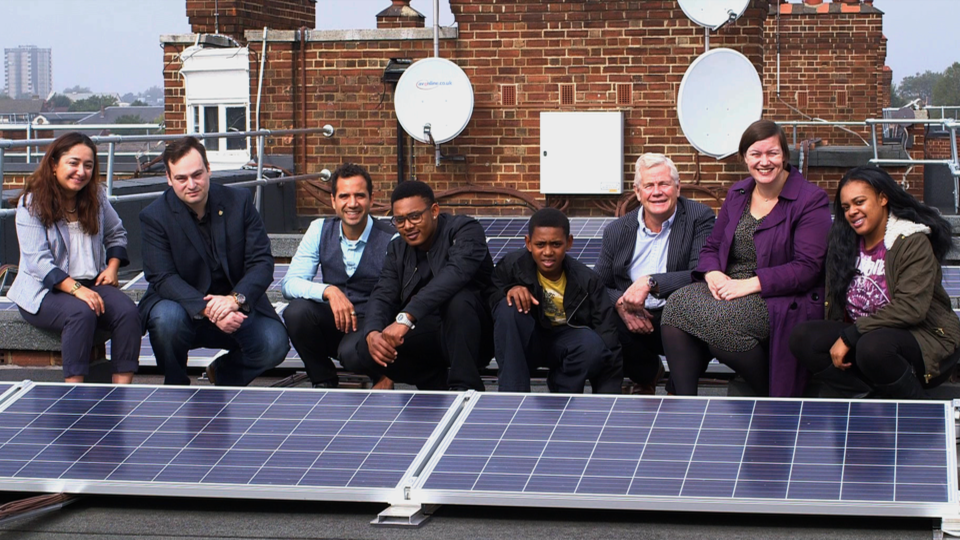 In 2012 a group of residents in Brixton, South London, formed a community owned energy co-operative and raised £58,000 from local residents to install solar panels on their estate - as a result, several more projects followed in Brixton and around London.

There are myriad reasons that have led the country to its current energy crisis and as a result there are many problems for those that rely on the system to keep the lights and heat on, such as rising fuel costs for many households across the UK and in increasing numbers, fuel poverty. In 2011, a group of volunteers and friends in South London came together to talk about new models of community-owned renewable energy to help their community tackle these issues. One of those people was Afsheen Kabri Rashid, a resident of South London with a background in developing and delivering environmental, behaviour change and carbon reduction projects, who at the time, was managing the Brixton Low Carbon Zone at Lambeth Council.

“There was a number of things involved in the project coming together: Whilst Brixton is a relatively deprived area, it is also a hub of activity and community with a strong feeling of getting together and doing things. We are part of a growing network there through Transition Town Brixton and the Green Champions Network and so there was already a movement and alignment of ‘we can’t be doing things same old same old and we need to be doing things differently here’, with regard to climate change and carbon reduction, to become more resilient as a community and think differently about how energy system works.”

In 2012 the group worked with the community in Brixton to form Brixton Energy Solar 1, the UK’s first inner-city, co-operative owned renewable energy project on a social housing estate. Inspired by co-operative energy moments and collective energy buying through community shares elsewhere in rural areas of the UK, the group formed on the Loughborough Estate along with local residents with a plan to install several hundred square metres of solar panels on the roof of Elmore House, a social housing block on the estate.

Long before a plan to install the solar panels was hatched, the group was already thinking about the community benefits of such a system, Afsheen Kabir said, “One thing we talked a lot about was making it an inclusive model. It had to benefit the community living here in Brixton and we were very conscious that just going around talking about energy and climate change wouldn’t be good enough and we wouldn’t be able to reach people living on the estate and living in the area with just that message. We always said that we need to provide work experience, training and opportunity for young people too, as well as saving money and creating warm and affordable homes and energy resilience. Not just the environmental benefit, but a broader community benefit.”

A year before the panels were installed, the group was working hard to convince the people of the estate of the viability of the project. For Afsheen and the growing team of volunteers, that process involved months of knocking on people’s doors in the local area to talk to residents; organising meetings to present the opportunity and allow it to be challenged; figuring out a sustainable and inclusive community business model, producing 20 years of financial forecasts and assessing where would be a good place to install solar panels.

“Brixton Energy Solar 1 was a product of lots of people coming together and shaping and developing it – bringing solutions and ideas together on a regular basis. When we came together to talk about our mission, vision and aims we also made sure that people could understand it and understand the benefits immediately.”

In the process of installing the panels, a new question of community benefit arose. The group wanted to supply the electricity generated from the solar panels directly into the block of flats on which they sat, but they were unable to do that because – whilst they were set up as an energy producer – they were not set up as an energy supplier. In order to be an energy supplier it would need additional and, hard to get, licences and consumer protection legislation. It had found a shortfall in its model. To make sure that the money made by the scheme would go back to the estate, the group created a community fund which would get a percentage of income generated. The community fund currently gets around 20% of the revenue generated and is used on the estate for everything from addressing food poverty issues and energy advice sessions to practical measures like free home energy audits and supplying draft-proofing to help reduce bills for residents.

The model created by Brixton Energy 1 was quickly replicated in other projects on estates in Brixton. Brixton Solar Energy 2 and Brixton Solar Energy 3 followed in the next two years, each project being set up as a separate Community Benefit Society, a form of co-operative.

Following the successful launches of the three Brixton projects, Afsheen and her co-founder in all three projects, Agamemnon Otero, launched Repowering London, a community benefit society set up to help others replicate the model they had helped to create in Brixton. “It was something that was scalable and replicable, something that went beyond Brixton. That when Repowering London came in. We recognise that each community has its own identity and so we don’t want to take away from that – we act as facilitator and an enabler so that the community will take ownership and management of its project. We work with each community to build the skills, provide the tools and the guidance and the skills and experience and equally help them in building and shaping the project through co-production to create projects for their local area,” said Afsheen.

The group has gone on to help set up and develop other projects in London, in partnership with other community organisations and local authorities. The first of these was developed in partnership with Hackney Council and local energy group, Hackney Energy, and resulted in Bannister House Solar which raised the largest amount of money to date, £149,000.

Repowering London exists on a mix of revenue from consultancy work and grant funding from government and local authorities, and – on the back of the success of Brixton and Hackney projects – are now going for bigger funders like Power to Change and the People’s Postcode Lottery. “When we raised funding for each project we would part raise money for our development fees too so that they could be provided free to the local community and local authority by building it into the financial modelling. But because the tariffs have changed every time we come close to accomplishing this and think we might be in a position to recover our fees, the market changes and we can’t do that. We have managed to survive through tough times but that has been dependent in part by grant funding and government funding,” admits Afsheen.

One of the things that has remained core to Repowering London’s approach is the need to build strong relationships with the community and create the conditions for a sustainable and inclusive co-operative model to exist and flourish in each of the projects it takes on. Most of Repowering’s projects have three or four directors who are local leader for the project. Those who show the initial enthusiasm in the early months might not be the people who stay until the end and some come in between a project. As a result, directors aren’t appointed until at least six months in, before the group knows each other and has worked with each other. At every AGM, a third of the directors stand down to give an opportunity for other members of the co-operative to take on new roles and the responsibility of running it.

Repowering London is a feature from our special edition newspaper; People Power.