Celebrating its 85th birthday this year, Lego has transformed itself over the last ten. Pursuing a forward-looking and savvy sustainability agenda, the toy giant has rediscovered its sense of purpose, says Fiona Shaw.

Driving north from Liverpool city centre, the skyline’s shiny office towers become hulking Victorian warehouses, before turning into towering turbines as the Mersey estuary pours out into the Irish Sea.

This is the Burbo Bank Extension, in which Lego invested 3.3bn Danish krone for a quarter of the 32-turbine Liverpool Bay site. The wind farm, which is a joint-venture between Danish energy giant Dong, pension firm PKA and Lego’s parent company Kirkbi A/S, generates enough energy to power 230,000 homes, helping Lego meet a goal to match all of its energy use to reusable sources three years early. In Jiaxing, China, a new factory will house 20,000 solar panels on its roof. Lego’s investment in renewable energy means it now creates more than it uses in its factories, stores and offices around the world. To celebrate, the toy giant built a Guinness World Record-breaking Lego wind turbine in Liverpool city centre, which will spend summer 2017 at the Legoland theme park. The 7.5m turbine uses 146,251 bricks.

Seven kilometres out to sea, the turbines tower over the faces of Anthony Gormley’s Another Place sculptures, which look wistfully out to sea from this North Liverpool beach. One rotation of each turbine can power a home for 29 hours. Alongside its sister site in Germany, Borkum Riggrund I, Lego has invested more than 6bn Danish krone (over £715m) in renewable energy in the last five years. 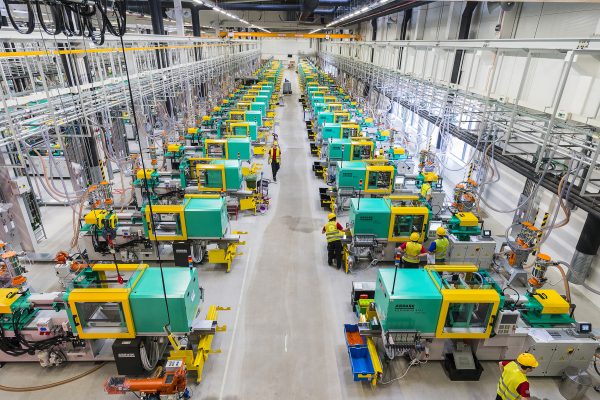 Since agreeing a partnership with the World Wide Fund for Nature in 2012, Lego has signed up to the WWF Climate Savers programme. Aimed at reducing greenhouse gases, the Danish giant works with partners to advocate for investment in renewable energy, and became the first toy company to join the RE100, a global initiative of companies committed to using 100% renewable energy. “Continuing with business as usual is not an option, not for the planet or for companies,” Gitte Seeberg, CEO of WWF Denmark said at the time. “Problems can best be solved by working together… Taking the lead and driving sustainable change in the value chain is showing genuine responsibility.”

Lego’s leadership of the sustainability agenda extends from its sustainable packaging to renewable energy and production. It has reinvented itself over the last decade, tying sustainability in with its ambitions to create a positive impact on not just the children it makes toys for, but on the environment, and wider society.

In the company’s 2016 responsibility report, owner Thomas Kirk Kristiansen says: “For four generations, my family has been inspired by children. By their curiosity, their creativity, and their potential to build anything they can possibly imagine. We feel a huge sense of responsibility to make a difference for children by providing quality products and play experiences that stimulate fun and learning.

“My family believes children are role models. That is because children are always exploring, creating and discovering. They are intuitive learners with a hands-on and minds-on approach to life. This natural curiosity is a precious quality; something to be nurtured in childhood and encouraged throughout life. People who continue to question and be curious are those best equipped to thrive in a constantly changing and challenging world.”

There are, now, more minifigures than people on the planet. And Lego takes its responsibilities seriously. Corporate responsibility targets revolve around innovating for children, environmental leadership and being a caring, ethical and transparent business. It partners with both the World Wide Fund for Nature and UNICEF; advocating for better child protection governance, and pursues a strong sustainability agenda alongside its responsibility for international labour and human rights.

And Lego is the world’s second largest toy-manufacturer. “We see children as our role models – and our most important stakeholders,” says Lego’s Kasper Balleby Hansen. “They inspire us to take action and live up to our responsibility as a company. The Lego Group wants to have a positive impact on the world – the world, our children will inherit.”

Together with WWF, the group has set ambitious targets to ensure more sustainable production, and by 2020 has committed to further increases in its CO2 efficiency for every Lego brick produced; it will continue to balance all of its energy consumption with the production of renewable energy sources, and aims to engage even further with key suppliers to reduce the CO2 emissions in its supply chain – the trickiest part of the brick-built jigsaw.