Just a Card is a volunteer-led community organisation, promoting the work of independent businesses far and wide. Emma Jones caught up with this issue’s local hero, Just a Card founder Sarah Hamilton, to hear more about the campaign, and how people can help their local traders…

As an artist and designer who sells my artwork through many galleries and retailers, I advocate the importance and the benefits of small purchasing from independents. Therefore, I launched the Just a Card campaign, in 2015, to encourage people to buy from designers, makers and independent shops and galleries to reinforce the message that all purchases, no matter how big or small, contribute to the survival of small independent businesses.

I launched the campaign to inform people about the incredibly positive impact that small purchases have on independent businesses, after feeling extremely disheartened to see so many wonderful, independent shops transforming into boarded-up eyesores. The inspiration behind the campaign sprang from an article which featured a haunting quote, triggering my determination and elevating my passion to support independents further. The quote came from the owner of a gallery which had been forced to close its doors: “If everyone who’d complimented our beautiful gallery had bought just a card we’d still be open.”

As the owner of a small business, this struck a real chord with me and I felt it was such a simple yet powerful way to share and promote a call for action. Today, the campaign lives online where anybody and everybody can get involved through purchasing window stickers for shops, pins for clothing and downloadable posters and buttons for notice boards and blogs, all of which help raise awareness of the campaign and promote how small purchasing, significantly contributes to the lifespan of independent production.

The Just a Card campaign has significantly grown since it was launched three years ago. I’ve gone from working on the campaign alone to being one of ten, who all adopt the value of shopping small and supporting independents. I’m now joined by an extraordinary team of volunteers who help with writing, blogging and the logistics of managing the distribution of shop window stickers and pins. The weekly #justacard hour on Twitter, social media engagement and the distribution of newsletters is also managed by volunteers who are incredibly passionate and dedicate their time to Just a Card, alongside running their own businesses.

The core aim of the campaign is to encourage people to appreciate the importance of every single purchase from small creative businesses. We use a card as our example of a small purchase, but it could be a notebook, a pin, a badge, a mug – whatever it is that people do, make or create. These small sales are incredibly valuable, and all add up. It’s these small sales that could be the difference between a business staying open and closing its doors for good. This is the message that we hope is starting to make an impact on those people who often feel like they’re insulting a business by purchasing something small. 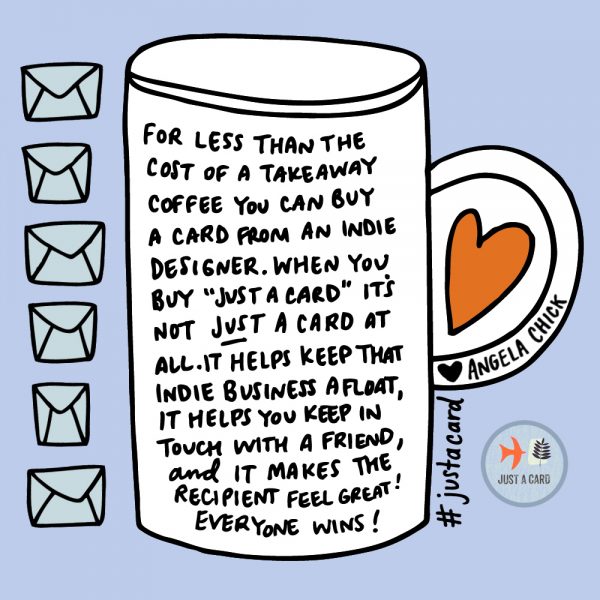 At Just a Card, we’re determined to convince people that it’s these small purchases that can potentially lead to bigger things. Perhaps someone buys a card or a print while saving for an original painting, or a friend spots a mug when they go over for coffee and ends up commissioning an entire set of crockery. We hope that by understanding the campaign’s message, the public will no longer be embarrassed to buy ‘just a card’ and will realise how much small purchases are valued by businesses they’re supporting.

I launched the Just a Card campaign through my own businesses’ social media pages, as I had a fairly strong presence and a large following of people connected to the creative industry, which enabled me to gain a significant amount of support very quickly. I was also delighted to receive immediate interest from Mollie Makes magazine and Patrica van den Akker, the director of The Design Trust. A one-stop-shop for designers and makers that offers valuable information, advice, tools and training for creative business owners. Patrica is very passionate about turning dreams into creative businesses, so having her push the campaign was highly beneficial in allowing us to connect with an entire community of creative entrepreneurs, who have experienced the powerful impact of small purchasing.

I’m very passionate about what the campaign stands for and have a lot of ideas of how we can move the campaign forward. However, it does take up an enormous amount of time, as we’re only volunteers running our own businesses alongside the campaign. There are always multiple struggles – fighting technology, how to pay the increasing costs, problems with the sticker orders, paperwork and much more, so I’ve certainly had moments where I’ve felt overwhelmed by the pressure. Yet despite the struggles we face, the message is far too important, and our wonderful supporters remind us of this, keeping our spirits up every day. I especially love working in a team who all value the ethos of what we do so lots of laughter, mutual support and friendship keeps us going.

The growth of the campaign has been very organic and our marketing mostly free. We rely heavily on the supporters to help spread the word via social media, without its powerful existence marketing the campaign would have been much more difficult. Until recently all expenses came out of my own pocket, however we’ve been lucky enough to find sponsorship to help us produce our shop window stickers and pins. The pin sales help pays campaign costs, which is living proof of how valuable small purchases really are.

We’re currently working hard to extend the reach of the campaign beyond the world of designers, makers and independent shop owners. We’ve been concentrating on trying to make press connections and have had considerable success so far, such as features on local BBC stations, blog posts and print press.

The reception towards the campaign has been amazing so far and the general public has become so aware of what we stand for, which is the first indication that we’re ultimately starting to achieve our aim. We receive wonderful emails and private messages on a daily basis which are full of support and certainly help keep us going on the harder days. Members of our community and campaign supporters tell us how much they value and appreciate the message behind the campaign and Just a Card is really starting to encourage the general public to re-evaluate the way they shop.

Our proudest moment so far has to be how popular our window stickers are, there are so many shops around the country that have the campaign in their window. It was also wonderful to set up at our first ever Top Drawer trade fair back in January this year, it was very special taking Just a Card to such a major event and actually shouting about it in person, as a team, for the first time. We’re so very grateful to Top Drawer for giving us this opportunity and we are very much looking forward to being back at Top Drawer later this year. We’ll be in full, ‘support independents this Christmas’, mode, as it’s a perfect time to start supporting independents. We’ll be working in conjunction with Anno’s Africa, an amazing charity that offers alternative, arts education to orphans and vulnerable children in Africa, by selling Christmas cards designed by celebrities. We’ll also be organising a bigger and better version of the Indie Friday event, that we organised last November, as an antidote to Black Friday. So, we have plenty of exciting projects lined up, all of which are bound to throw up some obstacles but as a team we are great at overcoming whatever stands in our way.

Just a Card wouldn’t be the growing success that it has been without such determined and passionate volunteers who all care so deeply in promoting the importance of small purchasing from independents. If I could offer one piece of advice to anybody wanting to try and launch a simlar campaign, it would be to be prepared to live and breathe it. Passion is essential, so is boundless energy, relentless determination and an uncompromising belief in what you do.

If you’ve got a local hero you think we should be talking to, email [email protected] and let us know…