Universal basic income, citizen’s income, basic income guarantee, universal demogrant… Whichever epithet you designate to it, it’s the same thing: a model to provide all citizens of a state or region with a given sum of month, regardless of their income or employment status. With several countries currently trialling the system, is introducing a universal basic income a progressive solution to society’s problems? Or is it a concept which will sell the world’s workforce short? We hear two sides of the debate…

If you earn an income in the UK, then Income Tax and National Insurance Contribution allowances mean that you don’t pay tax on some of your income. If you were given a cash payment of £60 a week, and you were then taxed on all of your income, you would end up with the same amount of money to spend.

If you are on means-tested benefits, such as Jobseeker’s Allowance, Working Tax Credits, or Universal Credit, and you earn additional income, then your benefits are reduced. The combined effects of benefits being withdrawn and paying tax can mean that for every extra £1 you earn you can end up with only 24p extra to spend, and often less than that. This isn’t much of an incentive to seek a better job, or to look for work.

But it needn’t be like that. It is perfectly feasible to turn means-tested benefits into unconditional payments, and to turn tax allowances into cash payments, so that everyone would receive a Citizen’s Basic Income (sometimes called a Basic Income, a Citizen’s Income, or a Universal Basic Income): an unconditional regular income that would never be reduced or removed. Any household that found itself no longer on means-tested benefits would pay tax on additional earnings but would no longer have benefits withdrawn, so spending power would increase much faster as earnings rose, and the household would find it far easier to climb out of poverty than it does now.

Research at the Institute for Social and Economic Research has shown that a Citizen’s Basic Income of just £61 per week would reduce poverty, reduce inequality, improve employment incentives, and take a lot of households off means-tested benefits – and it could do all of this without increasing public expenditure, or imposing losses on low income households.

It is sometimes objected that if everyone received a Citizen’s Basic Income then they wouldn’t work. As we have seen, the opposite is true. And people would be more likely to start their own businesses, to learn new skills, to look for a better job, and spend more time caring for others or working in their communities.

And it might be objected that the rich don’t need the money. But what’s the problem if it’s efficient to give it to everyone and then tax it back from those who don’t need it.

A Citizen’s Basic Income isn’t just for when the robots take our jobs. It’s a good idea now. 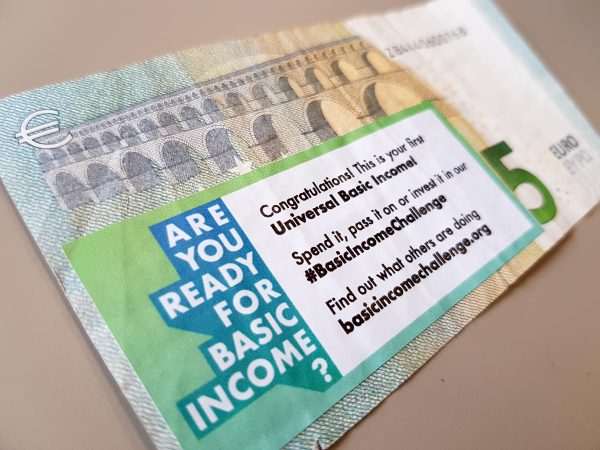 While it may not be unaffordable, a universal basic income would certainly be expensive. So, the merits of the idea need to be weighed up against other pressing government spending priorities such as the NHS, social care, and the environment. Or even better, combined with other priorities. What if we invested in thousands of community solar projects, which delivered an income for all but also contributed to the fight against climate change, as well as building community cohesion? Or what if we guaranteed a basic income to anyone who took care of an elderly relative or another citizen in need? Perhaps a conditional basic income could be more affordable and better value than an unconditional one?

Second, why do rich people need it? This assumes the added benefit of security for all outweighs the savings from a more targeted and nuanced model, which seems uncertain. Some advocates even argue that it needs to be universal in order to drum up enough support for the idea, while at the same time suggesting the money would be taxed back from the wealthy in any case. Surely one or two people might notice?

Third, how would a UBI dovetail with our existing benefits system? UBI would be much simpler and clumsier, ignoring complex needs and circumstances, such as disabilities. If you don’t like Universal Credit, wait until you meet Universal Basic Income! If UBI replaces existing welfare models, then citizens with the most complex challenges are in big trouble. While if it doesn’t, then UBI would be a relative sideshow, as current spending on health, social care, pensions and benefits already account for the majority of government expenditure.

Fourth, shifting responsibility onto government as the default provider of our incomes represents a truly fundamental change in the nature of the state from a safety net to first resort. This may not necessarily be a bad thing but it’s a brave move to advocate for such a fundamental philosophical and political reversal because a few Estonian villagers in a UBI trial reported they were a bit less stressed.

Fifth and linked to this, UBI would further relieve business of its responsibility to provide our incomes through wages. Do we really need more corporate welfare, not less? Aren’t many large private businesses already getting away with taking too little responsibility? Britain’s top five co-operatives, for instance, pay more tax than Amazon, Facebook, Apple, Ebay and Starbucks.

Finally, we should be sceptical of UBI simply because of the hype. Advocating UBI has become a sort of wonk badge of cool. Arguing for UBI shows you are smart and modern enough to understand the future, you can grasp the shape of the coming economy, AI, algorithms, robots taking our jobs, and so on. Yet futurists have been arguing robots would take our jobs for decades and we should be humble enough to admit we don’t really have a clue what’s around the corner. UBI is an idea for folk who take Nesta’s annual predictions about edible wearables and playable dirigibles far too seriously. If politics is showbusiness for ugly people, then UBI is sunglasses for wonks. As with other trendy financial solutionism, like Social Impact Bonds, we should maybe all just take a moment, reflect a bit more calmly on the prospect of UBI and cut the hype. Something for everyone to think about.

Dr. Malcolm Torry is director of the Citizen’s Basic Income Trust, a visiting senior fellow at the London School of Economics, and general manager of BIEN (the Basic Income Earth Network).

Dan Gregory is the director of international and sustainable development at Social Enterprise UK; he’s also an independent advisor under the banner of www.commoncapital.org.uk