Crowdfunding is projected to reach $90 billion in the next ten years. Consultants, cheerleaders and e-tailers Juxdit have grown from their campaign consultancy roots to supporting nascent businesses, post-campaign. Marketing manager Nico Spyrou takes a look at the sector's boom.

JUXDIT wears two hats; we started out as an international crowdfunding consultancy, experts in consulting campaigns from start to finish. But, after doing this for a while, we realised that the gaps in the crowdfunding industry expanded far beyond expert advice and understanding. Post-campaign was tough for products – products that were breathtakingly brilliant, and that was a problem.

So, we got to work on JUXDIT.com, our online marketplace that will be launching this summer. A place where the fantastic products that are backed by the crowd can come together to be easily accessed by the general public.

Needless to say, crowdfunding is what we are passionate about, whether clients are seeking advice pre-launch or need a helping hand with a campaign that’s already funding, our experienced team give the best advantage for running a successful campaign.

We do lots of different things, from podcasts and consultancy through to crowdfunded retail, offline events, crowdfunding at music festivals and more.

The past ten years has seen the crowdfunding industry rocket, with Forbes now projecting that it will be worth over $90 billion by 2025. There is so much potential for the products that are crowdfunded – JUXDIT’s aim is to aid them all in realising their potential as successful businesses.

Our mission is to revolutionise retail making every transaction an interaction, while supporting the funding democracy that is crowdfunding.

Crowdfunding has grown at a rapid pace in recent years. What do you put this growth down to?

A number of things. Most people would immediately point to the problems now faced with traditional finance in a post-recession economy. But, in my opinion, trust and choice play a large part in it too.

A lot of people have lost trust in the banks, the brands and the government. So much so that they’re reaching into their own pockets or placing their company’s fate in the hands of the crowd. Crowdfunding is an industry where everybody’s voice can be heard, it has opened up a marketplace where the everyday person can truly change the future of an organisation.

Naturally, with that comes choice. And choice matters. What if you don’t want to buy what a huge name brand decided you should buy? But instead, you want to purchase products from an organisation that you helped to create, because they’re products where more people focused? Crowdfunding gives choice and the ability to tap into exciting new brands before anybody else. It’s boutique buying on a grand scale and the best part is; the crowd curates it.

Lastly, accessibility has given this industry a real boost. Platforms are at the end of your fingertips and they make it simple – nothing is overly complicated, it makes sense and everybody can do it. That matters, I think there’s a real issue in the finance industry – everything is difficult to understand and most things take far longer than they should. When it comes to cash people want the information straight-up, in a simple format and as quickly as possible. Something that alternative finance seems to be getting the grip of, we’re not fully there, but we’re definitely on our way.

Tell us about some of the crowdfunding projects that you’ve been involved in.

Going back to our roots, we had the opportunity to work with stationary companies, a recruitment company, artists, design agencies, coffee shops, a tour company, we’ve even funded a Brazilian martial arts company – all of which we did live.

Moving forward, and online, we’ve had a wide range of projects on the go. The fantastic creative digital scene in Liverpool has lead to us working on some great tech projects. We’re currently working with an app that was picked up by Forbes – a travel app that claims compensation when your flight is delayed. I mean, what a brilliant idea!

We’re really lucky to get to work alongside such creative and talented entrepreneurs everyday. There’s never a dull moment in our office… particularly when JUXDIT.com samples arrive!

You recently ran a live crowdfunding event at Liverpool’s Sound City. How different is this process to online crowdfunding? How did the weekend work?

Our Direct To Fan campaign with Sound City and the leading music platform Pledge Music was a resounding success and great fun to run! We started with over 300 applications and whittled them down to just three finalists.

We worked closely with the finalists prior to, during and after the festival to ensure they were fully informed and supported. Each artist was different and tackled the campaign in their own way, which was fantastic to see. Giving the artists the best possible start to their campaigns and seeing them perform at the festival was one of our favourite moments of 2015 so far.

We were on site at Sound City for the conference had a huge ‘Team JUXDIT’ presence at the festival itself. To raise awareness, we had each artist follow a social media strategy. We provided on-stage updates from the JUXDIT team, as well as 60 second video vignettes playing on the main stage during breaks in between sets. It was a proud moment seeing over 50% of their targets raised in the first day alone of the festival and we’re already looking forward to next year.

The interesting difference between solely online versus a combination of offline and online is that we really felt the people power at the festival and how passionate old and new fans alike were to get involved. That’s the true meaning of crowdfunding and working in front of the crowd is a powerful force to experience first hand.

Do you see live crowdfunding becoming a major part of live entertainment or business events over the coming years?

100%. In fact, with the success of platforms such as Pledge Music we’re already seeing it. Crowdfunding is still very much in its infancy and it is another channel artists and those in entertainment can utilise to fund the next stage of their careers be it studio sessions for a new album or a bus to head out on tour. Established and new artists are now fully behind the movement, with bands such as De La Soul recently raising over $600k for their new album. We loved the well thought out rewards in their Kickstarter campaign. These included everything from a pre-order for the new album on USB to a day out record diggin’ in NYC with the band!

If enough people want to see something happen, crowdfunding is where it’s at – just look at the Crystal Maze campaign reaching its target in days to bring the much-loved TV show back! A big element of success for both of these campaigns is nostalgia – with the crowd emotionally invested. We’ll see more of the same, with much loved TV shows, movies, bands and performers launching campaigns and reconnecting with their long-standing fans.

Then, imagine all of that, but live. In front of a crowd that is brimming with avid fans and supporters. It’s a no-brainer.

You’re currently developing a crowdfunding marketplace. Tell us a little about that project and the people involved.

JUXDIT.com will be Europe’s first independent multi-vendor marketplace for successfully crowdfunded products, bringing them together onto one innovative platform that has user-experience at its core.

It has been created to lead the way with crowd focused retail. A marketplace with its user at the heart of it, giving vendors the ability to bring their unique and innovative products to market in just a few simple steps.

In short; the platforms created an investment democracy. So, we created a retail revolution. It’s the first step for crowd-focused retail, a JUXDIT.com term that sits at the core of everything we do. We’re excited at where it will be leading us over the next few years. 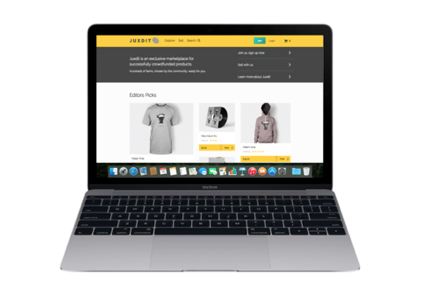 How do you see the alternative finance space evolving over the coming years. Will financial institutions play a bigger role in this marketplace?

You only have to look across the English Channel to answer that question. French banks have realised the power of alternative finance and are becoming more and more involved with it.

Over here? It will come. Even now, when applying for start-up loans with companies like Virgin, you’re asked if you’ve considered crowdfunding on the initial application form. Alternative finance has gained momentum and has proven itself as a worthy player in the finance world.

Harmonisation of the legislation that surrounds this industry across Europe is also being pushed, it will be interesting to see what will happen if this does come into fruition. A lot of continental Europe has more limiting regulation than the UK, and if their models are passed, we could see some major changes. I’d hate to see it become less accessible, as more financial institutions get involved, that will become a bigger risk.