Arete is a unique storytelling agency, which works with NGOs, governments and charities, and sources and manages local experts in photography, video, digital and written content from around the world. Jack Atkins caught up with Arete's founder, award winning photojournalist Kate Holt, to find out more about her process and ideologies...

When do you consider your work on a story to be done?

It’s never really done is it. I always find it frustrating when I walk away from a story and think “Oh God I really should have asked this question” or I like at my set of pictures and think “Oh I really should have shot THAT bit” so I suppose you never really finish, and people’s stories are always unfinished stories aren’t they. I think when we’re striving to tell people’s stories it’s important to get as much information as possible that’s going to engage people with their lives.

What constitutes success; is it getting people talking and raising awareness, or is it direct action?

I think it’s both. A lot of storytelling, especially the type of stories we produce and write and photograph, are about raising awareness because once awareness is raised change happens. I don’t think change is quick, and I think change is very much about changing people’s attitudes, and that’s a much longer and harder journey.

How often do stories come to you, or do you go to them?

A mixture of both really, I have a lot of clients such as Unicef, UNHCR, World Food Programme, the Guardian, and sometimes they’ll come to me and say “right we want you to go out to Iraq and we want you to cover this story and we’ll give you a driver and a translator and you’ll work with our project out there” and I’ll do what they ask for. What I often find is that there’s a bit of a disconnect between people’s expectations and what can actually be produced, because really often the story is not what they think it’s going to be. I like being flexible in that situation, and I encourage my clients to be open minded about what the end result may be.

With regards to commercial work, how hard is it to balance the profitable side with the humanitarian side of the business?

It’s not actually, although I get paid for producing humanitarian stories… one of the things I’ve discovered is that no-one sets out to do a bad job. Particularly charities, UN agencies, government organisations, the likes of Save the Children, Oxfam etc., none of them set out to cause harm. Ultimately we’re all on the same journey, we all want to create a better space and a better place for people to live and work in. So although we get paid for what we do, I think it’s important to keep in mind that even if I see things or I’m asked to do things I don’t like or are unethical, no-one is actually setting out to be unethical.

Have you therefore found that any of your images have been bastardised, or reproduced in a way that skews the narrative?

Yes! All the time! *laughs* No, not all the time, but I’ve definitely had bigger clients who have sometimes manipulated images which has really upset me. But I think since the rise of social media and internet platforms it is much less common now, as people are more aware that they’ll be found out. Before when we were mainly dealing with print media it was a lot easier for people to do that, so I think now there is much a greater autonomous policing because of the internet. 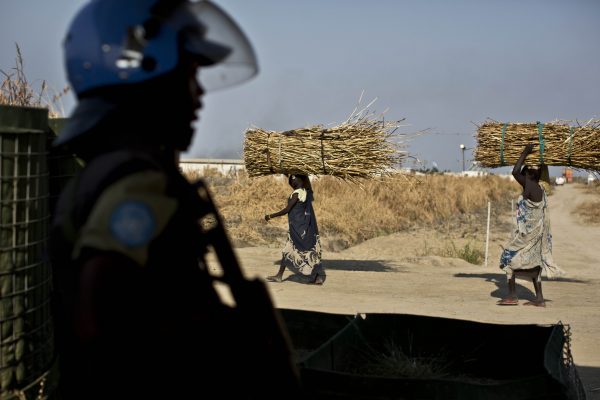 A UNMISS (United Nations Peacekeeping MIssion to South Sudan) police officer from Rwanda stands guard at the entrance to the UN Protection of Civilian Camp (POC) Malakal, South Sudan Wednesday, Dec. 7, 2016. Civilians who leave the POC are at risk of sexual assault and worse at the hands of militia groups and UNMISS has started to patrol the area around the camp to protect women who go to collect fire wood.

Because you know there is now a lot more transparency within the media, has it effected how you view your work and how you approach stories?

I know now there will be open to a lot more criticism, a lot more scrutiny, and I think that is really healthy for journalists, as I think it’s important that conversations are opened up and that everyone is entitled to their opinion. I think someone like me, I have a lot of experience working in different countries and it’s important that I make people aware that my opinions aren’t coming out of thin air, but a lot of my opinions come from experience out of long periods of time spent in difficult places. I think the internet is a really valuable tool, as you can do a lot more research into a subject as a result of the internet than you ever could before.

So how much do you find yourself relying on the internet for research, or do you still find the most valuable information from the people at the coalface?

To be honest when I go on assignment I do minimal research *laughs* I tend to do it post or when I’m in the field. I quite like arriving at places with fresh eyes and haven’t read to much into a brief or around the history of somewhere, because it’s amazing what you hear that you hadn’t really thought you’d hear. It’s really important to do first hand research and understand things from a personal perspective.

With you work with Arete how do you measure your success? Is it in seeing graduates work reaching high platforms, or is it in finding out the good in which they are applying their skills?

There’s two things. One thing we do with Arete is we do produce content. I find it hugely satisfying   when we manage to produce content, or a film, or photos that have launched big campaigns – last year we did all the film and photography and footage for the Disasters Emergency Committee appeal in East Africa. We managed to produce that content within a week, that was a huge logistical operation, and it was hugely satisfying when that appeal was launched – I think they raised 45 million off the back of the photos and content we produced. That was very satisfying.

We’ve launched Christmas appeals as well, which is hugely satisfying when you see how much leverage and money that makes. But for me personally, the most satisfying thing is training. I really enjoy being able to tell other people what I do, how I do it, and how they can be better at it.

Seeing the myriad horrors you must have encountered across your career, how do you unwind? Is it a case of switching off as soon as you finish working, or do you try and capture positive images even though they may never be used?

There’s always a light-hearted side to a story. I just got back from South Sudan where I photographed a project for Plan International. We were doing a whole story about teenage girls in early marriage, teenage pregnancy, and it was all quite depressing. But within that I went to look for photos of the girls with their favourite item of clothing because teenage girls all over the world are quite similar *laughs* Within that project I managed to find something light-hearted, in order to break-up what was… not a monotonous photoshoot, but it was a photoshoot where I think quite a lot of the images people would have seen before and I wanted to make it quite different; you’re looking for difference within difficult stories.

Do you ever take those light-hearted photos just to ease the situation, and have you ever found that they’ve changed the story completely?

It’s never changed a story completely, but I think those happy accidents are important for connecting people, so rather than showing people doom and gloom and horror all the time I think it’s important to show them something different so they don’t switch off completely, and to attempt to build a bridge between really difficult situations and the life we lead back in the UK. I think that’s a really important side of what I do.

Can you tell us about any upcoming projects or exhibitions you have planned?

In terms of exhibitions I had an exhibition about South Sudan in London in June, and that was about teenage girls in South Sudan and the impact of war and drought and food insecurity on their lives. I took part in the Eye Festival in Wales in October, where I did portfolio reviews and taught people how to tell stories. I’m also always running workshops about photography, video, ethical content gathering. Really I’m focusing a lot of my training on moving people away from this sort of image of Africa, and the Middle East, and other war torn countries, moving people away from that concept of ‘poverty porn’ and just more of a positive narrative rather than something negative.

All images courtesy of Kate Holt/Arete. Used with permission.

Read more about the work of Kate and Arete here