Lucy Chesters spoke to Shamayim 'Mama Shu' Harris, who, with her team of engineers, futurists, artists and urban farmers, has brought a once neglected part of Detroit, back to life...

Can you tell us about your own personal background?

I am a mother, a minister, a community organiser and a creatress in my city, Highland Park, Michigan. I am also a former school administrator, a Highland Park housing commissioner and the charter commissioner, in charge of writing a new city charter. In addition, I serve as a reserve police officer for the Highland Park Police Department and I am the first female chaplain in the department’s history.

I am not an urban planner or a wealthy developer, but I am building a village, Avalon Village, on a nearly-abandoned block in one of metro Detroit’s most blighted neighbourhoods.

Nine years ago, my two year-old son, Jakobi RA, was killed by a hit-and-run driver while he was crossing the street holding hands with his big brother. Following that tragedy, I made a conscious decision to change pain into power, grief into glory, and loss into love. I am doing that by rebuilding my neighbourhood, restoring city services, creating a safe place for children to play, and making a positive difference for my hard-hit community.

What was Highland Park like before Detroit went into economic decline, with regards to visible industries and the strength of the community at the time?

Highland Park was once a thriving, prosperous community full of working and middle class families. It was once known as “The City of Trees” with beautiful architecture and excellent schools.

In 1913, Ford Motor Company opened its Highland Park Ford Plant, which became the first automobile plant in the world to use the moving assembly line. The Model-T was invented just up the street from our village, and the main thoroughfare, Woodward Avenue, which serves as a main entrance point to the village, is the first paved road in the world.

What were the effects of the 2013 municipal bankruptcy on the community of Highland Park? Did the community band together or did people vacate in order to find work elsewhere?

The City of Detroit declared bankruptcy, but Highland Park did not. Still, the 2008 financial crisis hit Highland Park especially hard, and many homeowners went underwater on their mortgages. The tax base eroded, and eventually the city closed the library, closed (and tore down) the only high school in the community, and even repossessed most of the city’s streetlights. Despite this, people have banded together to help each other. There’s a strong sense of community in our neighbourhood because we really are a small town of only about 10,000 residents. We take care of each other.

With regards to the buildings and spaces that the Avalon Village will inhabit – what will these be? And have you faced any barriers along your journey to accessing the permissions to obtain these buildings?

We currently own 11 plots of land including three houses, with plans to obtain more in the coming months. We are building Avalon Village from the existing structures and spaces on our block, renovating abandoned houses where we can and demolishing others to open up green space for farming and modular shipping container installations. These will provide low-cost, affordable rent for commercial and residential living in the village. We have an incredibly productive and positive relationship with the local government and work hand-in-hand to redevelop the area. 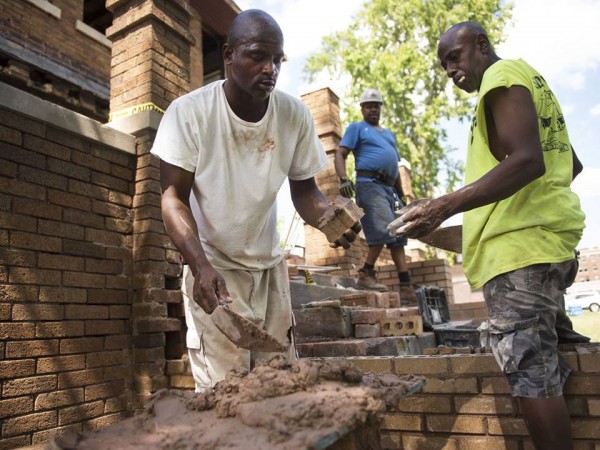 Tell us about your successful Kickstarter campaign – did you ever anticipate that it would gain such traction, not just in the US but globally?

We ran the second-largest civic design Kickstarter campaign in the history of Kickstarter! I’m so proud of my team, and grateful for the more than 1500 backers from around the world who supported our project. It goes to show that with a strong plan and a lot of persistence you can accomplish anything!

You have had an amazing response from the global community following your crowdfunding campaign – have you heard of any other communities that have taken inspiration from your project?

We’ve been inundated with emails, social media messages, phone calls and even in-person visits from people across the country and the globe. One man drove from Texas all the way to the village to deliver a $500 cheque from his own pension because he believes so strongly in our cause. We encourage our backers to think about how they can do the same thing, or something different, based on our success. We hope to empower many people to reclaim blighted and abandoned land and hope this becomes infectious!

Mama Shu appeared on the Ellen DeGeneres Show to spread the word about the Avalon Village, in September 2016.

Tell us about the community of engineers, futurists, artists and urban farmers who have united to create the Avalon Village. Are they all members of the Highland Park community, or have people come from further afield to help to build the Avalon Village?

We have such a fantastic team. Our site engineer Gerrajh is an expert in Civil/Environmental Engineering. He implements all of the sustainable “green” infrastructure in our village: solar lighting, solar roofs, water retention ponds, water catchment systems, greywater reuse and more. Together with our Project Manager Carlton, they form AKO Building Corporation which is focused on revitalising our community by hiring local workers to rebuild the neighbourhood.

We also have an international network of futurists and urban planners thinking about how to better utilise blighted urban space: everything from community land trusts and cooperatives to urban farming and eco-tourism. It’s an exciting project! 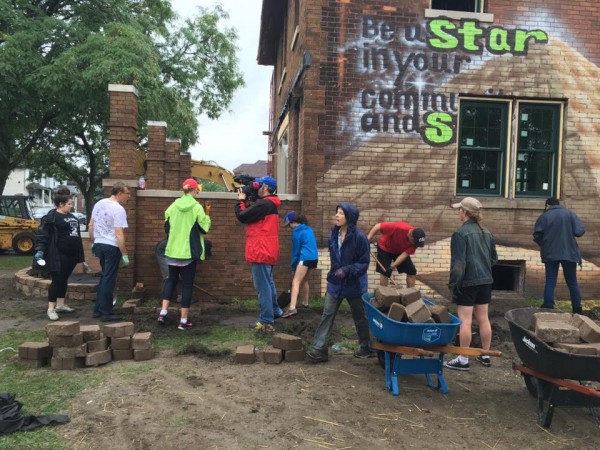 Can you tell us more about the sustainable aspects of the Avalon Village, why are these important for the future of the project?

We call ourselves a 21st-century sustainable eco-village because that’s what we are! We’re proud to be the site of Highland Park’s first solar streetlight, installed in 2014 by community organisation Soulardarity after Highland Park’s streetlights were repossessed.

We’ve also just installed Highland Parks’ first solar roof, donated by LUMA Resources. We’re taking the next step in rethinking municipal power and water on our entire block. We will capture rainwater on roofs and in retention ponds to feed our year-round sub-terrain greenhouses and more.

Can you tell us about The Goddess Marketplace, and the importance of empowering local residents to build their own businesses.

In 2014, the last time it was measured, Highland Park’s (official) unemployment rate was over 23%, or nearly four times the national average. Our talented and creative people are ready to work but struggle to find jobs. That’s why we created The Goddess Marketplace, an empowerment initiative for women entrepreneurs and a place for them to produce and sell their wares.

We’re going to move the Goddess Marketplace (from inside my house) into modular shipping container architecture. It’s low-cost and will keep the rents down for our vendors. And we’ll be able to hold regular open markets and events to invite the public in to shop. We’ve already purchased two shipping containers, and have had another two donated by the eWomen Network Foundation. They’re also supporting our local young women entrepreneurs with seed money to start businesses in those converted shipping containers!

Tell us about your greenhouse-to-cafe food system, how does gardening help to unite the local community and where do you sell the produce?

We know how vital a healthy diet is, especially for our children. All around us we see convenience stores with snack foods and very little fresh produce. The good news is that community gardening is on the rise all around us, and so we’re converting empty lots into greenhouses and urban farms. In the future, we will sell the produce in the Avalon Village Farmers Market and Blue Moon Cafe – a vegetarian café we plan to build out of an abandoned gas station! We’ll grow and serve delicious local food in the cafe, and also serve free food to the hungry.

What’s next for Avalon Village?

We’re going to complete The Homework House, then our second, third and fourth phases of construction. The work will take time. Once we finish fixing this block, we’ll start on the next one. From there, we’ll continue to transform blight to beauty and share our empowering story with others who will do the same. We see this project as truly a grassroots, national revitalisation project. Stay tuned!