In today’s fast-paced, technology driven world, it’s hard to switch off. Lucy Chesters talks to Calm’s community manager, Christi-an Slomka, about the benefits of relaxation, reflection, and finding your own moment of calm…

Each year, one quarter of people living in the UK will experience a mental health problem. Recent research from the mental health charity Mind, has shown that although the number of individuals suffering hasn’t significantly increased over the past decade – the ability for people to cope with mental health problems is on the decline. Currently, one eighth of people suffering mental health problems in the UK are receiving treatment; so, what about the rest? With NHS waiting lists growing by the day, and private treatment too pricey for most, many people are taking back control through meditation, mindfulness, yoga and other forms of exercise, to ease the daily stresses of modern times.

Mindfulness is the state of being present in the moment and taking time to reflect. Used as a therapeutic technique to deal with everyday stress and anxiety, millions of people globally have at least one guided meditation app installed on their smartphone. An oasis of calm in the palm of your hand, with which you can carve out a moment of peaceful reflection amidst the fast-paced technology-driven world of today; it’s no wonder that the wellness app industry is booming.

“Technology has changed the way we live, and in many ways, it has strengthened our capabilities and enriched our lives,” says Christi-an Slomka, community manager Calm, the number one mindfulness app on Apple’s app store.

“The problem is when we get sucked in to its addictive cycle. Without the ability to strategically use technology, we get used by it and are left feeling empty and depleted. Mindfulness has become all the more important because it makes us aware of how technology is impacting us. It empowers us to get back in the driver’s seat, and spend nourishing time in the present moment, taking good care of ourselves so that we can respond to our lives with energy and enthusiasm.”

Describing itself as the “Nike for the mind” the US-based Calm app helps users to meditate, breathe, sleep and relax, and is made up of several core components which help users to take back control, and find a moment of calm.

Calm Masterclasses are taught by world-renowned doctors and experts; the app’s Breathe Bubble provides simple breathing exercises to help users feel relaxed and recharged; Soothing Scenes showcases nature scenes and sounds; and, The Daily Calm is the app’s 10-minute guided meditation which explores and teaches the art of mindfulness. There are also over 100 Sleep Stories, which are read by experts and celebrities including Stephen Fry, Danai Gurira, Jerome Flynn and Bob Ross.

Yet, the paradoxical question of how a technology-based mindfulness app can help us to ‘switch-off’, is one of the first to spring to mind. As the increasingly filtered Instagram generation continues ‘living their best life’, how can technology offer an escape from the very technology that is making many of us miserable?

“Smartphones are extraordinary tools, but spending too much time scrolling or looking at screens can have an unsettling impact on our mental and physical health. At Calm we’re committed to helping people to shift their relationship with technology.”

A report published by the Center for Humane Technology has rated Calm as the ‘world’s happiest app’ – and it’s no happy accident that Calm ended up topping the list. With an average daily usage of 10 minutes per session, 99% of users left the app feeling happier because of their screen time, as opposed to feeling regret.

Following the experiment, which involved 200,000 iPhone users over a two-year period, Calm took the happy top spot, beating the likes of Evernote, Spotify, Headspace and MyFitnessPal. Looking at the apps which left people feeling unhappy and regretful, you’ll find Grindr at the bottom of the pile, with 77% of users reporting that the app left them feeling unhappy following an average daily usage time of 61 minutes. After 59 minutes per day on Facebook, 64% of users reported feeling unhappy, along with the 71% of unhappy people who spent 46 minutes per day on Candy Crush Saga.

The apps dominating the lower half of the results include the likes of Tinder, Instagram and Snapchat; and there’s a correlation between longer screen time, and unhappy people. It’s also interesting to look at the types of applications which are causing misery to their users – if it’s not an addictive game, it’s a platform which encourages users to add a rose-tinted haze to their life experiences. Otherwise, it’s a dating app which discourages real human interaction, replacing it with the gamification of attraction, basing ‘matches’ on carefully curated algorithms which rely heavily on users’ Facebook and internet browsing data.

Looking at the 15 happiest apps in the Center’s research, the screen time averaged out at 9.46 minutes per day; the 15 unhappiest lured their users in for an average of 54.2 minutes per day.

“Perhaps it’s not surprising that the apps that help us to organise our lives, educate us, and provide a soundtrack for our daily activities provide the most nourishment. The apps that we spend less time on left us with more positive feelings towards the app. But be aware – notice when you’re allowing an app to steal time from you,” says Slomka.

“Too often we’re checking our phones on autopilot and using our devices to ease boredom or drown out uncomfortable thoughts and feelings. The mindful use of technology invites us to use devices with intention and reclaim a big chunk of time that we unwittingly give away each day.

“A consistent meditation practice helps us to develop the awareness we need to make healthier decisions about how we use our phones. It reminds us that we’re in charge, not technology.”

Recently, the world was gripped by the rescue of 12 Thai boys and their football coach, trapped in a cave in northern Thailand. The boys – part of the Wild Boars academy team – were exploring the complex Tham Luang cave system, when rising water levels blocked their exit on 23 June. Nine days passed before two British divers located the boys and their coach, and began a dangerous rescue operation to bring them to safety.

In the days leading up to their discovery, the group sat waiting in a dark, damp cave, with limited food and water supplies. With no connection to the outside world, the group had no way of knowing if they would get out of the cave system, let alone be discovered in the first place.

When the divers found the boys, there was no panic, no tears, no distress; instead, the boys greeted the two divers with curiosity, asking which country they came from, before being left alone once more with only torches and the promise that food and a medic would be arriving soon. When the group was found, they were meditating.

Meditation dates back millennia – first recorded around 1,500 BC as a traditional Hindu practice, meditation spans many other religions and belief systems, straddling both the spiritual and secular worlds.

After being orphaned at the age of 12, the coach of the Wild Boars, Ekapol Chanthawong, went to live in a Buddhist monastery where he learnt mindfulness meditation, a form of meditation which is taught in Thai Buddhism, and is said to have many health benefits including reducing anxiety and depression, as well as easing physical pain.

Using his decade-long experience of living in a Buddhist monastery, Chanthawong taught the boys the art of meditation to keep them calm. British diver Ben Reymenants commented after the rescue that the coach held an individual hour-long meditation session with each of the boys before they began their journey to safety.

Mindfulness meditation kept the boys calm during in one of the most stressful experiences of their lives; one that most of us will thankfully never experience. Used in this way, meditation is effective. Today, meditation and mindfulness are used by millions of people globally as a way of reducing stress, self-improvement and relaxation. But, with the benefits of mindfulness being propagated far and wide, what’s to stop businesses cashing in on the latest trend? And, are tech businesses taking advantage?

“We don’t think so,” says Slomka. “The importance of wellbeing and mental fitness is here to stay, and there are many avenues for collaboration and innovation in the space.” But, she adds: “as the mindfulness space continues to grow, we have yet to see how regulatory entities react.”

Currently, there is little regulation surrounding the practise of mindfulness, and scientists have warned that if conducted incorrectly, mindfulness could have a negative impact and could even trigger relapses into anxiety and depression. With the health and wellbeing market saturated with mindfulness practitioners – many of whom are unqualified to treat patients with mental health problems – choosing a qualified practitioner is much harder than simply opening Google and choosing the most popular. 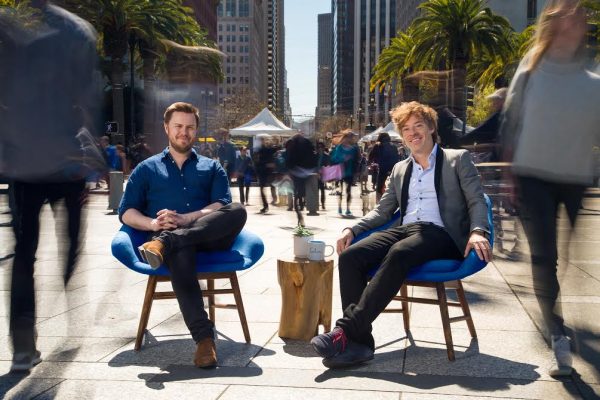 But, the fault lies on both sides. There’s no quick fix for mental health, and it takes time to find the balance that is right for you. In a fast-paced world where we have information at our fingertips, an app for pretty much everything, and a mild-technology reliance to boot, you could be forgiven for thinking that your mental health is a quick fix.

“Eating well, exercising, sleeping and mindfulness are all part of a healthy lifestyle. As is true with most things – balance is key. We support people to build a meditation practice in small doses each day,” says Slomka.

With thousands of testimonials showing support from users across the globe, Calm has been rated the World’s Happiest App, as well as being chosen as Apple’s 2017 iPhone App of the Year and Google Play’s Editor’s Choice 2018. And it’s all backed up with science. Meditation experts share their decades’ long experience in the field, whilst science and healthcare professionals tout the benefits of being mindful.

“We’re helping users tackle some of the most important mental health issues of the modern age including anxiety, depression and insomnia.