← Spring: an introduction to journaling
Get paid what you deserve… →
Toronto has always been a hub of free-thinking individuals and outspoken social commentators; you only have to walk around the city to see anything from quotes and memorials, to celebrated urban activist Jane Jacobs, to crust-punks on street corners sneering at fat-cats and shouting down the ever-looming threats of gentrification. It’s part city, part big village.
Share —
Facebook
Twitter
Email
Published —
04.24.19
Writer —

In 2003, realising that something wasn’t quite working, a group of social entrepreneurs came together to try and change the social mission sector of Toronto, in order to affect meaningful change and alter the conversation about social innovation. They moved into the Robertson Building on Spadina Avenue in the heart of Downtown Toronto, and formed the Centre for Social Innovation (CSI) – one of the first co-working spaces on the planet.

Since its inception, the CSI has expanded across Toronto and beyond, going from one location on Spadina and 14 founding tenants, to over 2,500 members across three locations in Toronto itself (Spadina Avenue, The Annex, and Regent Park in Cabbagetown) as well as affiliate spaces in Manhattan’s Starrett-Lehigh Building, and space in London, Ontario. CSI wants its members, and the organisation as a whole, to change the world. No mean feat, but if no-one is willing to at least try then all hope is lost.

“We identify as a company who put people and planet first, so we’re really asking people how they’re trying to change the world. That’s the most important question,” says Shona Fulcher, director of community, Centre for Social Innovation.

The aims of the CSI are expressed through nine clear values:

• Make social change and have fun doing it

These aren’t just tokenistic buzzwords or clever skin-deep branding, CSI lives and breathes by them “Honestly the most important question we ask on every tenant application is ‘how is your work innovative?” says Fulcher.

CSI isn’t going about this alone and is instrumental in helping set up Social Innovation Exchange Canada, a national network of social innovation organisations. Through this network, CSI is hoping to educate, share information, and learn from its peers, seeing if it can collaborate in meaningful ways to enable real change.

That’s not to say they’ll accept just anyone into the fold “We absolutely do turn people away,” Fulcher says. “What we mostly do in those situations where we feel like this space is not the right fit for you, we’ll suggest other spaces we know of and suggest you connect with one of those as they may be a better fit.

“I think there are so many varieties of co-working spaces now, that a fit for everyone is a possible thing, but it is important to us that all of the organisations in our spaces are putting people and planet first and trying to create a better world. That’s our focus. We’ve got a mission.”

Walk around downtown Toronto and you will surely come across StopGap, a not-for-profit organisation with a simple solution to a problem that effects millions. Co-founded by engineer Luke Anderson, StopGap was established to help those living with assistive apparatus, navigate cities in an easier way.

“It is very exciting for us to be hosting StopGap. Literally one brightly coloured volunteer built wooden ramp at a time they’re changing the face of Toronto by making steps accessible where they weren’t accessible before,” says Fulcher.

StopGap is based in CSI Spadina, and relies on volunteers and donations to make the project a reality. It is also working with other teams within the CSI network to make StopGap a virtual tool too, enabling people to check an establishment on Google to find detailed accessibility information without having to rely on Google Earth or Streetview and take a risk.

“They’ve been with us for a couple of years, it’s incredible. They actually built StopGaps for our locations, and are building a very large StopGap ramp for our new Spadina location,” says Fulcher.

It’s not hyperbole to say that StopGaps are everywhere in Toronto, the idea is brilliant in its simplicity and has been embraced and implemented by seemingly every organisation, shop, or restaurant that requires one. 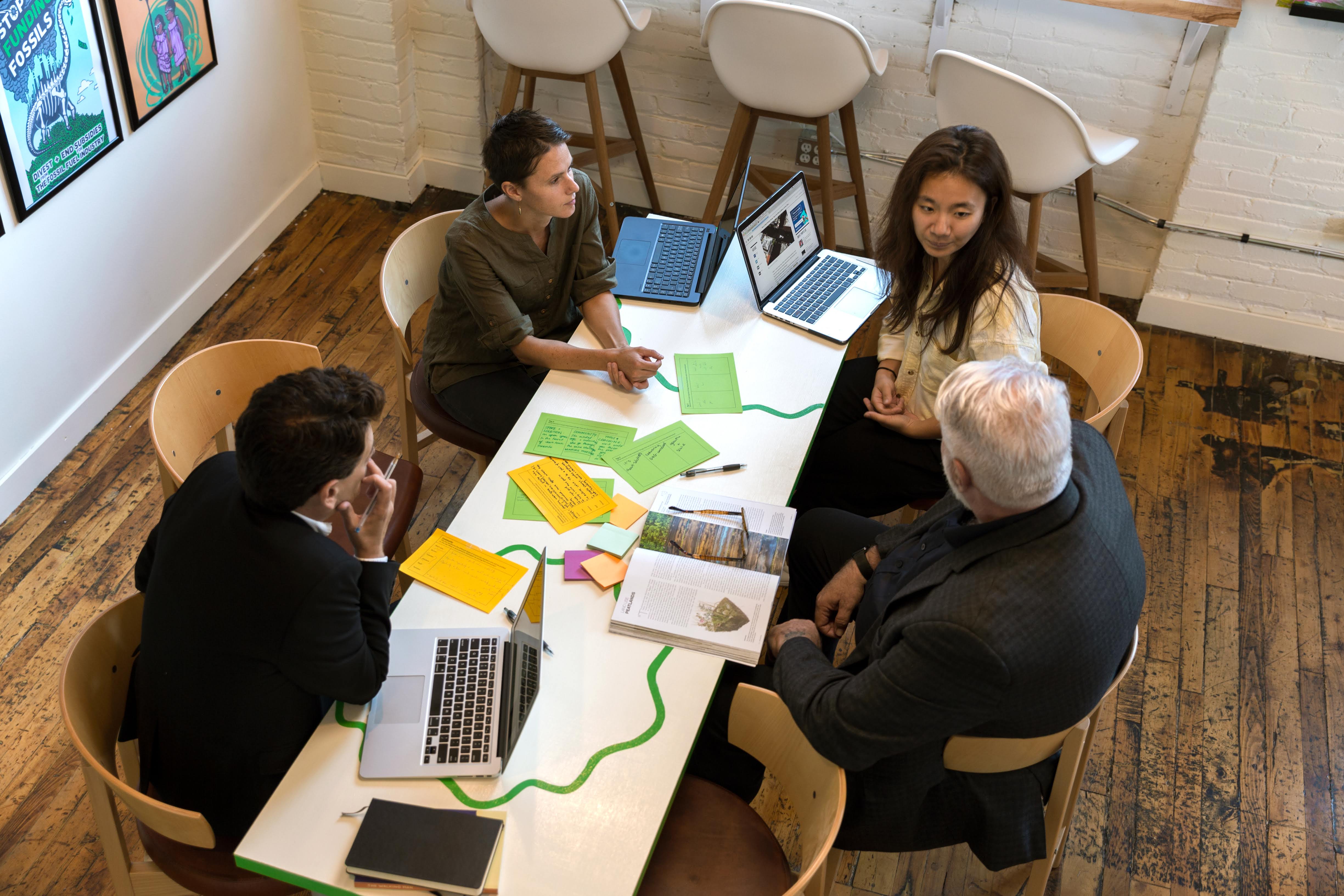 “We just launched our Climate Ventures space this year, which is a space that CSI has put together to be able to provide a home for people who are particularly tackling climate change. We provide them with additional coaching so we can really help accelerate folks into these spaces, and help revolutionise sectors as well,” Fulcher tells us.

The aim behind Climate Ventures is to help achieve the UN Sustainable Development Goals and support the businesses and organisations fighting against everything from climate change, deforestation, fossil fuels, and the mass displacement of climate refugees.

By utilising CSI’s vast network of tenants, clients, and friends, the Climate Ventures space is ideally set-up for those looking to make quick connections and vital breakthroughs with their work.

The dedicated Climate Ventures website contains a network of current members, alumni, and support staff, showing which of the Sustainable Development Goals are being tackled by each member. For potential tenants, it is a handy tool to show off what work is being done, as well as to see what gaps need filling, and what points need more attention.

“We’ve got a lot going on and it’s really very exciting at the moment. Our normal is to be at the deep end at all times, so there’s always some incredible stuff going down,” says Fulcher.

“I think that as we move and grow, how we grow changes. But certainly, the affiliate locations are key because people were coming to us and saying, ‘CSI is an incredible place and we need something like it in London, Ontario, or New York City’, and we’re stepping into that space and helping them grow these culture-based islands of sanity in this quite challenging time.

“It’s people who are already really working on it and I can’t imagine we’d not continue to be supporting organisations who are trying to create spaces for positive change in the world. There’s definitely more of that on the horizon, in that supporting and consultancy role for sure – we just helped Staples launch their first co-working space as well. We’re trying to grow the sector and grow the mission,” she says.

The future of work is co-working and hot desking. Trends in the UK alone suggest that the number of citizens registering as self-employed is growing, with no signs of reverting against the trend. CSI is uniquely placed as leading the way in how to do these kinds of institutions properly, not just bunging some desks in a warehouse and saying ‘figure it out for yourself’.

“I’m always excited to see members launch new initiatives, and for us to be supporting and acting as a launchpad and a platform for our members to continue to grow their missions and their businesses. I’m always leaning in and watching them… Twenty One Toys, as an example, has just come out with their third iteration of their interactive toy game, and they’ve done loads of that here. It’s just so exciting to see an organisation grow in a way like that,” says Fulcher.

Twenty One Toys is an award-winning educational support company, designing a range of interactive educational tools and toys to help teach concepts such as empathy. Its mission is based on the questions: ‘Where are creativity, play, teamwork, and empathy in our classrooms, our boardrooms or the public square? More importantly, how do we teach these critical skills?’

By teaching school children to learn empathy and embrace failure, Twenty One Toys hopes to prepare today’s school children for a 21st century work-life – one where a career you start at 21 may not be the same you have at 31.

Based at CSI Annex, Twenty One Toys have won a heap of plaudits and awards for its products, receiving coverage form Yahoo Finance, Forbes, and Time, amongst others.

← Spring: an introduction to journaling
Get paid what you deserve… →