← A Day in the Life: Soap Star
Reinventing the wheel →
Housing people is proving one of greatest challenges of our time. But where problems lie, so does innovation. Fiona Shaw speaks to Leeds Community Homes’ Rob Greenland about new ideas and new ways of funding them…
Share —
Facebook
Twitter
Email
Published —
10.24.17
Writer —
Fiona Shaw
Movement —
Community , Social Enterprise
Industry —
Housing

With a widespread consensus that the housing market is broken, people working in and around the sector are looking at new approaches to building, buying and renting. New ideas and new thinking bring innovation to the housebuilding sector, focusing on an inclusive approach that wins over local communities, and provides affordable and sustainable housing. But often, slowly. The question is how to scale approaches and create those 131,000 extra houses we need. Every. Year.

Rob Greenland is one of the people behind the Empty Homes Doctor (EHD) in Leeds, which brings empty properties in the city back into use. Through his social enterprise Social Business Brokers, “we try and explore how to work with other people to tackle complex social problems,” he says. EHD supports people who “might have inherited a house,” says Greenland, “or moved away. They want the house back in use, but don’t know how to do it.” Since it started in 2013, EHD has brought 200 homes back onto the market.

“How can we do something different at scale that will create more affordable and sustainable homes?” is the question he’s asking now, as part of Leeds Community Homes (LCH) – a broad coalition of the city’s housing expertise.

“Leeds needs 66,000 new homes over the next 10-12 years,” admits Greenland, “and our aim is to create 1,000 of those. The point of LCH is that we’ve brought together different expertise, especially around affordable and empty homes, to find out what can we do together that we wouldn’t be able to do on our own.

“We settled on a community share offer very early on. It brings what is called ‘patient capital’ – money that isn’t a donation, but investors won’t get their money back immediately. And, because it’s designed to create a community around an issue, engagement is important. Housing is traditionally a social issue where, if people do engage, they often react to something – against a new housing development, for instance. They’re more likely to feel powerless. A community share offer and community benefit society builds a community of people who think ‘I want more housing in my city, that’s more affordable and sustainable.’ It taps into a different type of finance.”

LCH’s £362,000 came from 275 people and organisations, including £100,000 from Power to Change’s Community Shares Booster Fund. Of the £260,000 put in by individuals, around two thirds were from the Leeds area, with the other third around the UK. “There was a real mix. The minimum investment was £100, and while lots of people invested £100 or £200, the average investment was around £750,” says Greenland. “We were surprised – we thought we might reach more people and they’d put less money in, but a good number of people put in £1,000 upwards. £20,000 was the biggest investment.”

That community, as ever, is a powerful one. “We know some of our investors, but there are plenty of people we don’t know, so it’ll be good to get to know them over time and get to know what their motivations are,” Greenland says. The share offer tapped into ethical and positive investors; the majority of LCH’s investors are aged 50+. “They’re hoping for a bit of a return and would like to get money back eventually, but they’ve bought into the social purpose.”

The slogan ‘people-powered homes’ drove LCH’s campaign. But it wasn’t all plain sailing, admits Greenland: “Some issues are easier to communicate and sell to people – many community share offers – like saving a pier, or a local pub – are focused on a specific thing and are very tangible. It was a bit more difficult for us. The concept of people-powered homes really tapped into something. People realised that if they want things to be better, they would have to get involved. I can remember thinking in November, ‘oh God, are we getting the message out and reaching people?’ But we did a good job of it.

“We ran a really good social media campaign, but a lot of our investors didn’t find us that way – they came through our networks and through talking at events and political party meetings. But that takes a lot of time and resources that we didn’t have. But it’s an effective way of reaching influencers who you couldn’t reach in other ways.”

Awareness and perceptions of the housing crisis have changed over the last few years. Greenland says: “Even if it’s working for you, and you live in a home where you can afford your rent or mortgage – there are lots of wider issues that affect you. If we can’t attract young people who’ll set up businesses; or build houses for older people to downsize to, there’s a wider impact. Increasingly people recognise that their own children can’t buy a house, and look more widely in society. They’ll ask ‘how is it for people who aren’t in the position we are? It’s even tougher for them…’ Housing stories used to be dominated by people making money – now the story has changed.”

Leeds Community Homes is just one example. In the UK, the Community Land Trust (CLT) movement is spearheading an alternative approach to local housing, and – two days before Christmas 2016 – the government unveiled an annual £60 million Community Housing Fund. But cities nationally and internationally have unique conditions that are contributing to a global crisis. In March, the UN’s housing lead Leilani Farha concluded that the world’s money markets have priced people out of cities. Speculators treat housing as a “place to park capital,” she said. “Housing has lost its social function and is seen instead as a vehicle for wealth and asset growth. It has become a financial commodity, robbed of its connection to community, dignity and the idea of home.” The global housing market, worth $163 trillion – more than twice the world’s total economy – has “essentially operated without any consideration of housing as a human right and states are complicit: they have supported financial markets in a way that has made housing unaffordable for most residents,” Farha reported.

In Canada, Montreal’s elegant Milton Park is owned collectively by its residents. In the 1970s, the city’s government fast-tracked private development, demolishing many traditional areas. When a private developer began buying-up private rented properties in Milton Park, residents opposed it through direct protest, lobbying, door-to-door canvassing and mass attendance at public meetings. As construction costs and delays dented the development model, the residents seized their chance and – supported by the city – took ownership of the housing by creating co-operatives for each block. Each co-op co-owns Milton Park, under the Communauté Milton Parc (CMP) umbrella. Tenants in these ornate Victorian townhouses pay around a third of local market rents, and, if sold, the community’s socio-economic characteristics must be protected.

Back in Leeds, LCH’s first scheme will see 16 eco-homes built – nine for social rent and seven for intermediate sale, at around two thirds of the local market value. Its CLT-structure will ensure they’re affordable when they’re sold on. The development – on a former-industrial, brownfield site near the city centre – will house people on the council’s housing waiting list, while Greenland says they’re still in the process of working out the conditions of the ‘for sale’ houses.

Work starts in early summer, with the first round ready in spring 2018. “All of our homes should be lived in by early summer 2019,” says Greenland.

The CSO’s success has brought renewed opportunity. “We’re looking at our pipeline of projects now,” he says. “Because we raised the full amount, we could borrow against these homes in the future, and we’re looking at other sources of finance. The council has a pot of money from the proceeds of Right to Buy that we could apply for, and we’re talking to social investors. If you’re going to compete against big developers and pension funds, you need to be creative about brining in finance. Our CSO was central to that, but we’ll need other funding to go alongside it.”

LCH’s target is the creation of 1,000 homes over the next ten years. Some will be their own projects, while they’ll also support others – co-housing groups and other projects in the city – with their plans, or help them buy land.

“Of all the social issues we could have picked, housing is complex and difficult,” admits Greenland. “We’re optimistic, but conscious that we’re getting into a difficult area – the policy environment, land market and economic situation over the next few years will create lots of bumps in the road. But we’re very clear on our purpose, which is to create more affordable, more sustainable housing. When you do something like the CSO you genuinely have no idea how people will respond. We were overwhelmed – to raise that amount of money was amazing. When things feel difficult, it’s good to be reminded that people want to do something positive and will put their money behind it. They – and we – know we need to do things differently.”

← A Day in the Life: Soap Star
Reinventing the wheel →

Make yourself a home 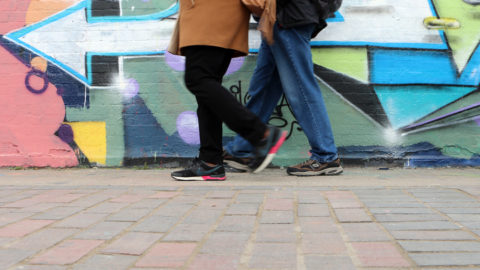