Here at Ethos HQ, we’ve been so busy in the first week of our crowdfunder, it feels a little bit surreal. We first started talking about Ethos Magazine as a concept back in 2014, and pretty much the first agenda item in our first meeting was whether or not we should crowdfund to make it happen.

We finally decided in June 2016 that we’d go for it sometime in the Autumn. So here we are, and here it is…

We’re raising £20,000 to fund our first print edition, due in January 2017. Our business model is based on raising revenue through ad sales and print sales, so we can get on with writing, printing, and distributing our beautiful magazine to over 10,000 people globally, keeping you informed about the very best in next generation ethical entrepreneurship. But over the course of 2015 and 2016, we realised that we needed to get the magazine out there in people’s hands before it could really be believed in as a concept. Every path led back to asking for hundreds of small scale contributions from people who could buy into the idea at a fundamental level. So we set about figuring out the best way of running a crowdfunding campaign to get the first edition printed and distributed.

Countless elements of our work went into the planning of the crowdfunder. There were dozens of meetings, and a panoply of google docs, to do lists, filming schedules, slack channels, emails back and forth. This was all in addition to the regular work of writing and commissioning good stories about good people doing good business. It’s certainly been challenging!

We’d set our crowdfunder to go live first week of October, but realised a couple of weeks beforehand that we still needed to do some more preparation, so we put it back to 12th October. As the day arrived, we were all super nervous – we’ve worked independently on fundraising campaigns for other organisations, and on social and awareness raising campaigns too. But none of us had ever gone out to the public to raise money for a project of our own before.

Lucy pressed the button at 7am Wednesday, and suddenly, we were live. All that planning, all that work – it would all mean nothing if people didn’t start contributing. We had spent weeks telling people about the campaign, we’d scheduled emails to go out, we’d done all the prep we could. But all we could do now was hold our collective breath and hope.

Within an hour, we had our first contribution – £300. By 10am, we’d sold an advertising spot in the first edition. By the end of the day, we were well in excess of £1000 raised. Virtual high fives all round, we felt we were on course to reach our target. A week later, and we’re still on target! Almost £5000 in the kitty, a commitment to fund from people who haven’t got round to it yet, and a plan to start putting into action the next stage of the production.

A brief wobble on Friday was quickly over, and a long-standing commitment to attend a business festival has turned into a chance to tell hundreds of people about the campaign. We’re all still a little bit nervy about the progress of the campaign, and we’re all still hoping against hope it’ll work out ok. But so far so good. We’re on our way, and we hope you’ll join us for the ride. Sign up to the campaign and be a part of something special today. You can find our campaign here: http://igg.me/at/ethosmagazine 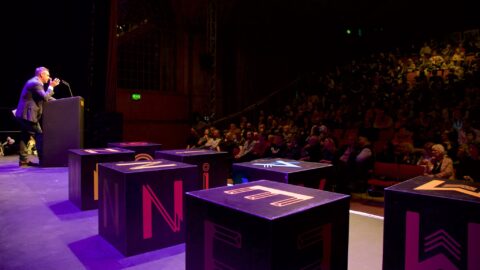